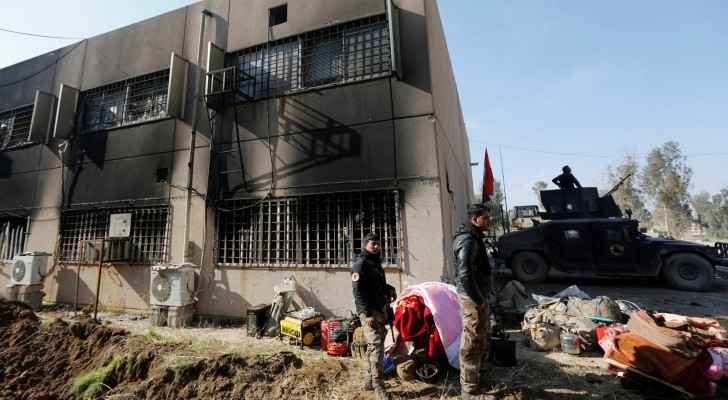 Military commanders told AFP the assault had begun at dawn after overnight air strikes by the US-led coalition backing Iraqi forces, with the jihadists putting up fierce resistance.

The push into Mosul's Old City -- a densely populated warren of narrow alleyways on the western side of Iraq's second city -- marks the culmination of a months-long campaign by Iraqi forces to retake IS's last major urban stronghold in the country.

The loss of Mosul would mark the effective end of the Iraqi portion of the cross-border "caliphate" IS declared in the summer of 2014 after seizing large parts of Iraq and neighbouring Syria.

The military announced the start of the assault in a statement, saying the army, counter-terrorism forces and federal police had "launched an attack on the Old City".

Machinegun fire crackled and plumes of smoke rose above the Old City as surrounding Iraqi positions were hit with heavy mortar fire.

On the first floor of a building on a street lined with destroyed car repair shops, a commander holding a tablet computer feverishly called in coordinates for an air strike against a suicide car bomb approaching his position.

Staff Lieutenant General Abdulghani al-Assadi, a senior commander with the Counter-Terrorism Service (CTS), said the operation was advancing slowly "to preserve civilian lives as we breach the enemy's defence lines".

"Our forces have moved in on foot because the alleys are very narrow," he said.

"There is no room for our vehicles to manoeuvre and there are many civilians."

Save the Children sounded the alarm over the fate of some 50,000 children, half the number of civilians it said were trapped in the Old City.

"They are running out of food and water, and face violence wherever they turn," the charity's Ana Locsin said.

"The impact of artillery and explosive weapons is likely to get even more deadly and indiscriminate, putting vulnerable children at greatest risk."

Surrounded by Iraqi forces on three sides and blocked on the other by the Tigris River that runs through Mosul, the jihadists had no choice but a fight to the finish, Assadi said.

"This is the last episode of the Daesh show," he said, using an Arabic acronym for IS.

"It's our most difficult operation. Fighting is fierce because it's their last stronghold... They have nowhere to flee."

Assadi said he hoped the operation could be over before Eid, the feast marking the end of the Muslim holy month of Ramadan, expected around June 25 or 26.

"But I think it is going to take longer," he said.

Iraqi forces launched the battle for Mosul in October, retaking the eastern part of the city in January and starting the operation for its western part in February.

"This will be a terrifying time for around 100,000 people still trapped in Mosul's Old City and now at risk of getting caught up in the fierce street fighting to come," the IRC's acting country director Nora Love said in a statement.

"Both coalition and Iraqi forces must do everything in their power to keep civilians safe during these final stages of the battle for Mosul."

Since the battle to retake Mosul began, an estimated 862,000 people have been displaced, although 195,000 have since returned, mainly to Mosul's eastern side.

On Sunday, only yards from Iraqi forward positions and falling mortars, civilians could be seen cleaning their homes on streets lined with rubble.

Some people appeared to have never left while others, carrying boxes of food and canvas bags stuffed with clothes, were returning to areas the security forces retook from IS only days earlier.

It was in Mosul in July 2014 that IS chief Abu Bakr al-Baghdadi made his only public appearance, urging Muslims worldwide to move to the group's "caliphate" straddling Iraq and Syria.

The jihadists have since lost most of the territory they once controlled in the face of US-backed offensives in Iraq and in Syria, where an alliance of Kurdish and Arab forces are advancing on their last Syrian bastion Raqa.

It is not clear how many IS members remain in Mosul, where many foreign fighters have joined local jihadists since the city was taken.

"The locals in Daesh will shave their beards and try to blend in with the civilians as they always do," Assadi said. "The foreigners will fight hard and eventually get killed."

The fall of Mosul was the Iraqi forces' worst defeat in the war with IS.

Regaining it would cap a major turnaround for security forces, who broke away and ran despite outnumbering the jihadists who attacked the city in 2014.