Iraqis desperately hunt for their charred cars in post-ISIS Mosul

"We heard many say, 'Rather my car than my family'." 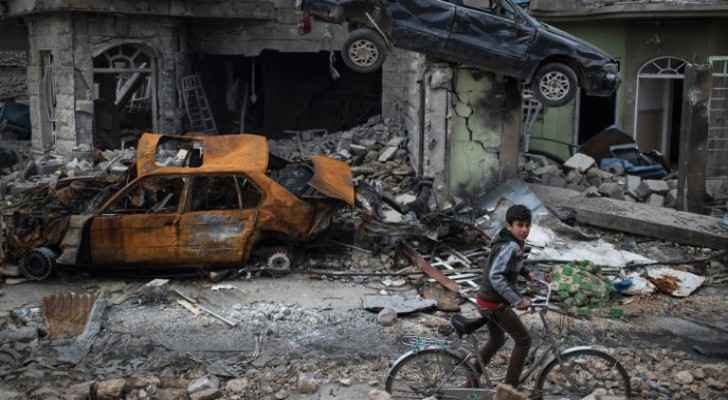 Saliha Sultan searches in vain for the family car among mounds of charred car skeletons and mangled trucks blocking roads in parts of Iraq's Mosul retaken from jihadists.

Vehicles of all shapes and colours -- in varying condition -- fill the streets of the northern city as Iraqi forces battle to retake its last western districts from the Islamic State group.

Tens of thousands of civilians have fled Mosul since anti-IS fighters backed by a US-led coalition launched the battle to retake the city in October.

As she searches for the family pick-up truck with her neighbour, Sultan is one of many Iraqis now returning home to find their vehicles are nowhere to be seen.

"We parked it near the house and left... but when we returned, it wasn't there," said the 40-year-old, dressed in a purple and brown overcoat.

"I don't know who took it," she said of the car her family left in their west Mosul district of Haramat when they fled fighting in March.

Near homes now abandoned by fleeing civilians, parked cars are covered in dust and rubble, some devoid of windows shattered in the fighting.

Umm Kamal, another returning Haramat resident in her forties, said she had no idea where her family's car has disappeared to either.

She and her family left the car near their home when they escaped as clashes intensified last month, but a few weeks later it has vanished.

"We reported it to the security forces, and we hope they will bring it back to us," she said.

"My children worked for 15 years to be able to buy it," said Umm Kamal.

Abu Nashmi, a 31 year-old member of the security forces, said he and colleagues have helped to reunite several families with their cars.

"Many families are complaining about their cars having gone missing, burnt or stolen by IS," he said.

"Sometimes, we find cars parked in the parking lots of other people's houses," he said.

"If there's data available, we contact their owners and ask them to come and take them."

"Daesh would gather cars from the streets, trying to block our progress" with improvised road barriers, he said, using an Arabic acronym for IS.

And they would "burn them to block the view of reconnaissance drones, as well as Iraqi and coalition planes," he said.

In areas they had retreated from, "they rigged cars and trucks with explosives to detonate them remotely as we advanced", he added.

Near the Haramat neighbourhood, a large barrier of cars stacked one on top of the other cuts across the main road.

Abu Hassan, a 40-year-old businessman, said vehicles left behind by fleeing civilians were used "as a defence line between the army and Daesh during the fighting".

"IS burned some of these cars as revenge against owners who did not pledge allegiance" after it overran the city in 2014, Abu Hassan said.

But after Iraqi forces launched their assault to retake the IS bastion, the jihadists "turned a large number of the cars into car bombs, and burned others to obstruct the view of warplanes".

On their side, Iraqi "military bulldozers worked to pile cars and trucks from the streets on top of each other, out of fear of car bombs and to block any attack by Daesh".

"A large number of families helped the army by parking their car in the middle of the road to cut it off from IS," the officer said.

"We heard many say, 'Rather my car than my family'."