The Al-Hirak al-Shaabi, or Popular Movement, has been holding protests for weeks. 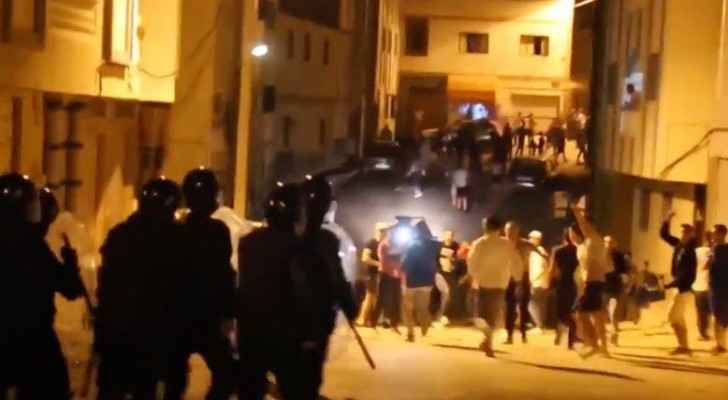 Nightly clashes between protesters and Moroccan security forces in the flashpoint city of Al-Hoceima over the region's marginalisation are turning more violent, a witness and a news website said Friday.

"Around 100 residents gathered on an avenue (on Thursday night) to demonstrate. Security forces intervened in strength," said one witness, contacted by telephone.

"They were hitting people. Youths dispersed into sideroads and started throwing stones, while the police used tear gas," the source said, adding that women were also attacked and several protesters hurt in running battles.

Le Desk, a news website, said: "The nightly confrontations... are turning into a riot... into pitched battles with police, with stones being thrown and tear gas fired."

The stepped up protests come after a court on Wednesday sentenced 25 demonstrators and suspected members of their grassroots movement to 18 months in jail each, according to their defence lawyer.

The Al-Hirak al-Shaabi, or Popular Movement, has been holding protests for weeks in the neglected Rif region of northern Morocco, demanding jobs and an end to corruption.

The demonstrations have been taking place at night, after the breaking of the daytime fast observed during the holy Muslim fasting month of Ramadan.

Hirak leader, Nasser Zefzafi, was arrested on May 29 and is in custody in Casablanca awaiting trial, along with other leaders of the movement.

Al-Hoceima has been rocked by worsening social unrest since the gruesome death in October of a fishmonger, who was crushed in a rubbish truck as he tried to retrieve swordfish that had been thrown away by the authorities because it had been caught out of season.

Demands for justice snowballed into the wider grassroots movement.

Woman has abortion after being beaten up by husband in ....

Woman has abortion after being beaten up by ....

Woman has abortion after being beaten up by ....

Woman has abortion after being beaten ....