Cumhuriyet has seen over a dozen of its staff members charged under the state of emergency imposed after the failed coup. (Photo from Twitter) 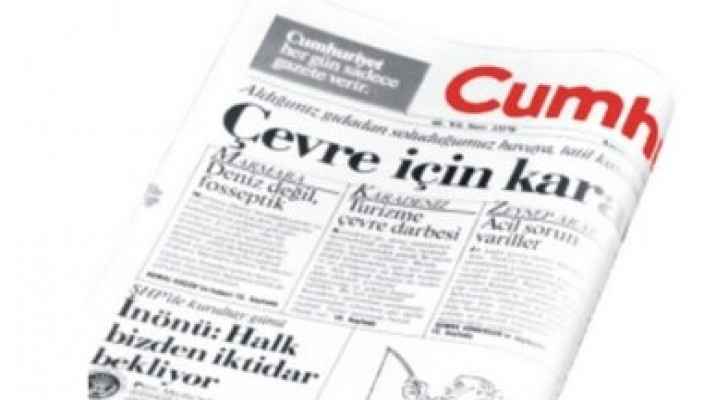 Oguz Guven is accused of "spreading propaganda for a terror organisation", according to news reports. If convicted, he faces up to 10 years in prison.

Guven has been formally arrested over a news story about the death in a traffic accident in May of senior Turkish prosecutor Mustafa Alper, who had been a leading figure in the prosecutions of suspects detained over last year's failed coup.

An Istanbul court late Wednesday ordered Guven's release pending trial on the grounds that he was not deemed a flight risk, the private NTV television reported.

The first hearing is set for September 14. Guven was released from Silviri prison near Istanbul.

Guven said he had mixed feelings about his release, coming on the day former journalist turned opposition lawmaker Enis Berberoglu was sentenced to 25 year in jail for handing secret information to a newspaper.

"It's a bittersweet feeling. The day I am freed I hear about Enis Berberoglu's arrest," he said.

Berberoglu was immediately arrested in court to serve his term. It is the first time a deputy from the main opposition Republican People's Party (CHP) has been locked up in an ongoing crackdown.

A leading critic of Turkish President Recep Tayyip Erdogan, Cumhuriyet has seen over a dozen of its staff members charged under the state of emergency imposed after the failed coup.

Most are in jail, including the paper's current editor-in-chief Murat Sabuncu, veteran commentator Kadri Gursel and cartoonist Musa Kart.

Cumhuriyet's former editor-in-chief, Can Dundar, was last year handed a five-year-and-10-month jail term and has now fled Turkey for Germany over a front-page story accusing the government of sending weapons to Syria.

Turkey ranks 155 on the latest Reporters Without Borders world press freedom index, below Belarus and the Democratic Republic of Congo, after dropping four places from its 2016 ranking.