"No matter how white phosphorus is used, it poses a high risk of horrific and long-lasting harm in crowded cities," - Human Rights Watch (Photo from T 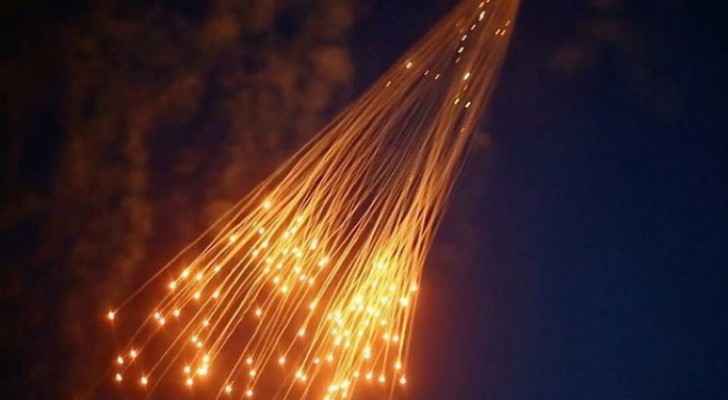 The Human Rights Watch organisation on Wednesday urged the US-led coalition fighting the Islamic State group in Syria and Iraq to protect civilians from the effects of white phosphorus.

The statement comes after several instances in which the US-led coalition has deployed the munition in the fight against IS in Iraq's Mosul and Syria's Raqqa city.

"No matter how white phosphorus is used, it poses a high risk of horrific and long-lasting harm in crowded cities," said HRW arms director Steve Goose.

"US-led forces should take all feasible precautions to minimise civilian harm when using white phosphorus in Iraq and Syria."

White phosphorus can be used to create a smoke screen or as a battlefield marker, but it can also be deployed as a deadly incendiary weapon, a use prohibited under international law.

Last week striking images shared by activists and the Islamic State group showed white phosphorus being used over Raqqa city, where a US-backed alliance of Kurdish and Arab fighters is battling to oust the jihadists.

Asked about the incident, coalition spokesman Colonel Ryan Dillon declined to "discuss every detailed use of munition or capability available across our formations."

But he added that white phosphorus was used "in accordance with the law of armed conflict" and "in a way that fully considers the possible incidental effects on civilians and civilian infrastructure."

HRW said it had not been able to independently verify any civilian casualties resulting from the use of white phosphorus.

The Syrian Observatory for Human Rights monitor said 23 civilians had been killed by white phosphorus used in Raqqa on June 8.

The Britain-based group said the US-led coalition had dropped the munition from planes.

But HRW said the images from Raqqa were characteristic of ground-fire artillery projectiles containing white phosphorus.