On Tuesday, Morocco announced it would send food by plane to Qatar. 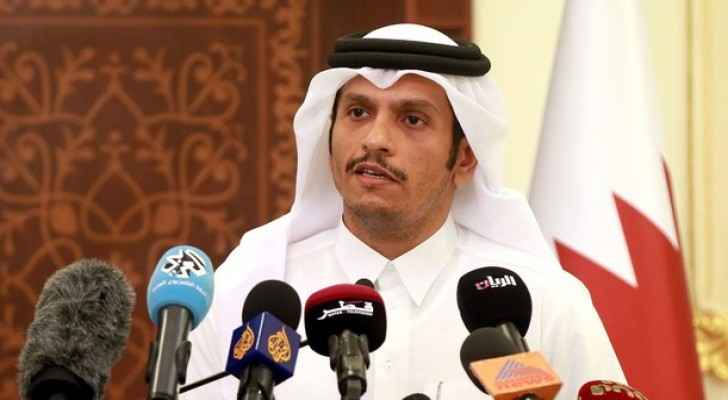 Qatar on Monday denounced the sanctions imposed against Doha by Saudi Arabia and its allies as "unfair" and "illegal", as Britain announced talks to try to resolve the crisis.

"Whatever relates to our foreign affairs... no one has the right to discuss," Foreign Minister Sheikh Mohammed bin Abdulrahman Al-Thani told reporters during a visit to Paris.

He called for "dialogue based on clear foundations" over accusations that Qatar supports extremist groups.

"Qatar is willing to sit and negotiate about whatever is related to Gulf security," he added.

Saudi Arabia, the United Arab Emirates and Bahrain are among several countries which last week announced the suspension of all ties to Qatar over what they say is the state's support for extremist groups and its political proximity to Shiite Iran.

In London, British foreign minister Boris Johnson called for calm and said he would meet this week with his counterparts from Saudi Arabia, Kuwait and the UAE.

"I have urged all sides to refrain from any further escalation and to engage in mediation efforts," he said.

While praising Qatar's restraint during the crisis, he added: "In finding a resolution, I call on Qatar to take seriously their neighbours' concerns.

"Qatar is a partner of the UK in the fight against terrorism but they urgently need to do more to address support for extremist groups, building on the steps they have already taken to tackle funding to those groups."

In Paris, Sheikh Mohammed, who is on a European tour to drum up support for Qatar, said his country had no idea what had provoked the move against it.

"It's not about Iran or Al-Jazeera," he said, referring to the Qatar-based broadcaster. "We have no clue about the real reasons."

But he supported moves by Kuwait to act as a mediator in the dispute "with the help of friendly countries such as the United States," he added.

Sheikh Mohammed's courting of Europe -- he has also visited Germany and Russia in recent days -- though did not go down well in parts of the Gulf.

UAE's foreign minister Anwar Gargash took to Twitter on Monday to claim Qatar had sought to "internationalise the crisis with its brothers".

And in Kuwait, which has not joined its neighbours in acting against Qatar, foreign minister Sheikh Sabah al-Khaled Al-Sabah warned that the crisis "may lead to undesirable consequences," according to a quote on state news agency Kuna.

Qatar is home to the largest US airbase in the Middle East, Al-Udeid, making it a key ally in the US-led coalition against IS in Iraq and Syria.

In Doha, Qatar Airways called on the UN's aviation body to declare the Gulf boycott against the carrier "illegal" and a violation of a 1944 convention on international air transport.

Qatar Airways has made Doha a global hub in just a few years, but industry analysts say banning it from Gulf states' airspace could threaten its position as a major transcontinental carrier.

Al-Baker also criticised US President Donald Trump for comments he has made linking Qatar to supporting terror.

"I think that President Trump's comment about my country is ill-placed, ill-informed, and I can again repeat that I'm very disappointed in him."

Qatar announced Monday that it had launched direct shipping services to ports in Oman in a bid to bypass the Gulf "blockade".

Saudi Arabia has closed the Qatari peninsula's only land border, threatening imports of both fresh food and raw materials needed to complete a $200 billion infrastructure project for the 2022 football World Cup.

However, one source told AFP on Monday that Qatar's World Cup preparations continue "as normal".

Three ships carrying 350 tonnes of food were also set to leave Iran for the emirate.

On Tuesday, Morocco announced it would send food by plane to Qatar.