Tensions are high in Kabul since a truck bomb last Wednesday killed more than 150 people. 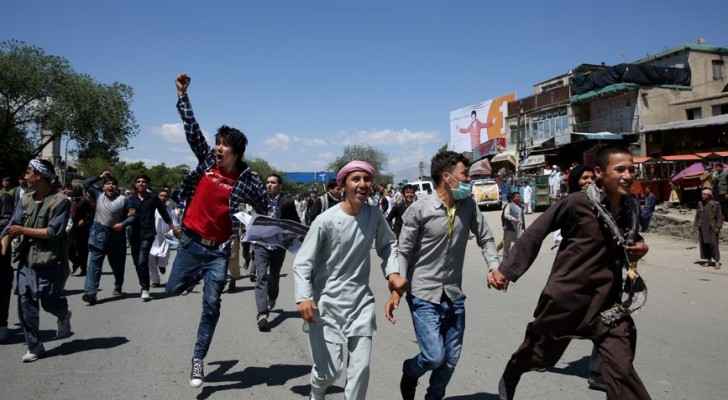 Tensions are high in Kabul since a truck bomb last Wednesday killed more than 150 people and wounded hundreds in Kabul's fortified diplomatic quarter, in the deadliest attack in the Afghan capital since 2001.

Protesters enraged by spiralling insecurity have established sit-in camps in at least six locations around Kabul, including one near the bombing site, demanding the resignation of President Ashraf Ghani's government.

Ghani has roundly rejected the demand, including calls to sack his powerful national security advisor Hanif Atmar, while demanding an immediate end to the protests.

"We ask our countrymen to end their protests which have caused problems considering the sensitive security situation and... open the roads for traffic," the presidential palace said in a statement.

"If the protests continue, the government will take legal action against the demonstrators to ensure security for our people."

But the protesters are refusing to give in despite insurgent threats still looming on the city.

"We must clearly say that any use of force against our civil protest will lead to catastrophe," protest leader Asaar Hakimi warned on Facebook.

"We will continue our protests until our demands are met."

Any violent showdown between authorities and protesters could spiral into chaos, a threat that has prompted government allies including former warlord Gulbuddin Hekmatyar to call for peace.

Last Friday at least four people were killed when hundreds of protesters clashed with police, prompting officials to beat them back with live rounds in the air, tear gas and water cannon.

"Unruly protests have proved bloody in the past, and these unfortunate events should not be repeated," Hekmatyar said.

"I ask the protesters to remove their tents. Roads and streets are public property and nobody has the right to block them."

The Italian-run Emergency hospital, seen as a medical lifeline in Kabul, has also voiced fears for the safety of its staff with protesters camped near their facility.

"Our hospital has been put on the frontline," Emergency said in a statement earlier this week.

"To continue our work we are asking only one thing: Security around our hospital and not to be targeted intentionally."

The attacks have exacerbated tensions between rival ethnic groups and raised the prospect of a political crisis.

Rabbani survived an attack at the funeral of one of the protesters on Saturday where suicide bombers tore through a row of mourners. He blamed "terrorists within the system" for the blasts, suggesting it was an inside job.

The government has accused the Taliban-allied Haqqani Network of Wednesday's bombing and said the funeral was targeted by bombers trained at a religious seminary in Pakistan.