The cause of the fire was still being investigated and there is no confirmation whether it was accidental or deliberate. 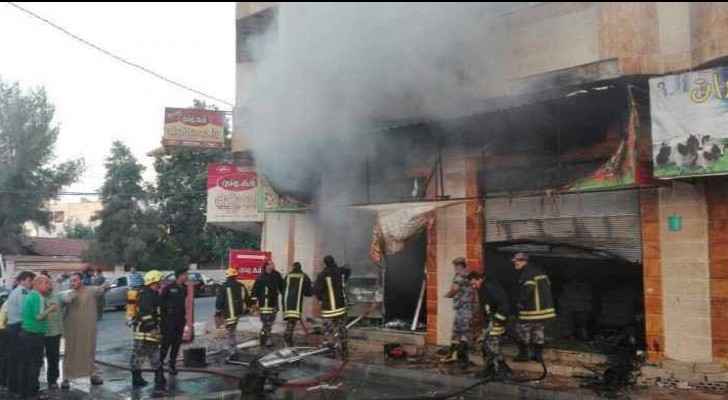 The cause of a fire in a shop on Wednesday morning in the town of Al Sarih, south of Irbid city, is being investigated by the Civil Defence Department (CDD), with unconfirmed media reports linking the fire to recent tribal violence in the town.

Several media organisations have suggested that the fire, which occurred in a building material supply shop in the centre of Sarih, was a deliberate act of arson.

The CDD, however, told Roya English on Wednesday that the cause of the fire was still being investigated and that there is no confirmation whether the fire was accidental or deliberate.

Speculation about the causes of the fire comes after a shooting on Saturday evening in Sarih left a 50-year-old man dead and one other person injured, after a house was attacked by gunmen in a continuation of violence between two tribes.

A relative of the man killed on Saturday spoke to Roya English via phone on Wednesday from Sarih, asking not to be named due to safety concerns.

Asked about the events surrounding the fire, he said “we don't have any news” about the cause of the fire or who or what was the behind it.

The source speculated that the fire could have been caused by an “electrical problem”, rather than arson, though the CDD did not confirm or deny this.

When asked about tribal violence in the town, the source told Roya that “all of Sarih is one family” and said that he suspected “outside parties” of stoking tensions, though was unable to explain possible motivations for a third party provoking violence.

There has been “no discussion between [the two feuding] families”, the source explained.

While adding that recent violence “did not come from our family”, the source also insisted that his family did not want any reprisals for his relative’s death, saying that the father of the man killed on Saturday wanted the civil authorities to resolve the conflict.

“We don't want anyone to be killed from the other family, or their property to be destroyed. We are all equal under the law”, the source told Roya.

Sarih has seen simmering tensions for several months, with an eruption of violence between two families in May leaving one man dead, 12 injured and several buildings set alight.

A campaign by security forces following May's violence led to the arrest of 12 people and the seizure of one firearm.

A main suspect in the shooting in Saturday's fatal shooting was arrested on Monday, a security sources is quoted by the Jordan News Agency, Petra, as saying. The source added that a number of other suspects, who are believed to have been in the vehicle at the time of Saturday's shooting, were detained, while police also seized the suspected weapon and the vehicle used in the attack.

The Jordan Times also reported on Tuesday that that former prime minister Abdur-Rau’f Rawabdeh and a number of former senior officials and community leaders from Sarih are involved in efforts to reconcile the two feuding tribes.