Omran Daqneesh, pictured looking healthy with his family at his home in Aleppo. (Facebook) 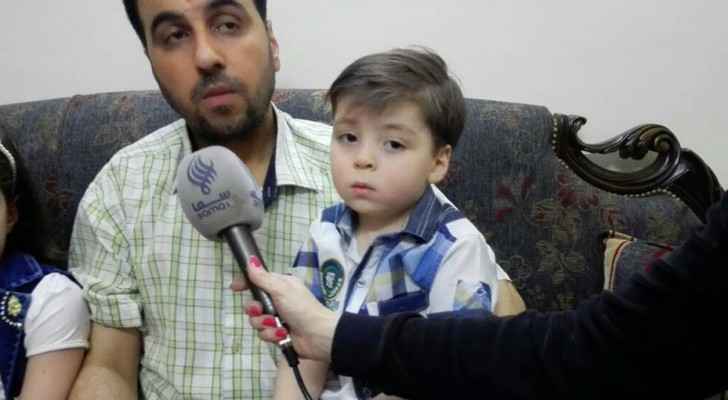 New footage has emerged of Omran Daqneesh, the 5-year-old Syrian boy whose bloodied and shellshocked image shook the world as he was photographed in the back of an ambulance in East Aleppo.

In photographs published on social media on Monday, Omran appears healthy and recovered as he sits on his father’s knee ten months after his neighbourhood was targeted by an alleged Russian airstrike. His brother Ali later died of his wounds from the same airstrike.

The new images were posted on the social media account of a pro-Syrian government television presenter, Kinana Alloush, and show the young boy living in Aleppo, which is now under the control of forces loyal to Bashar al-Assad.

"The child Omran, those who tried to shed Syrian blood mislead the news that he was hit by the Syrian Arab Army," Alloush wrote on Facebook. "Here he now lives in the Syrian state with its army, its leader and its people."

In a short interview clip posted by Alloush, Omran’s father tells the TV presenter that he did not hear a plane above his house before the strike and said he rejected offers to leave Syria by parties wishing to damage the reputation of the country’s armed forces.

“Everything is fine and out life is normal,” Omran’s father, Abu Ali, tells the interviewer.

He went on to say that the viral image of Omran was used as a propaganda tool by rebels. “They took his pictures and started posted them and started trading with his blood.”

According to Abu Ali, he was forced to change his son’s name and his hairstyle to evade individuals and deter rebels from intimidating and exploiting his family.

The legitimacy of the video and the willingness of the family’s involvement remains unclear. The Syrian government has carried out similar propaganda efforts in the past, promising benefits to defectors or displaced civilians if they speak out against alleged rebel crimes.

‘Last Men in Aleppo’ director and producer make it to the ....

7 rescuers from the White Helmets shot dead in gun attack

7 rescuers from the White Helmets shot dead in ....

7 rescuers from the White Helmets shot dead in ....

7 rescuers from the White Helmets shot ....