One killed as 'tribal' violence flares up in Irbid's Al Sarrieh

Civil Defence personell extinguish a fire in a shop in Al Sarrieh, southwest of Irbid city. 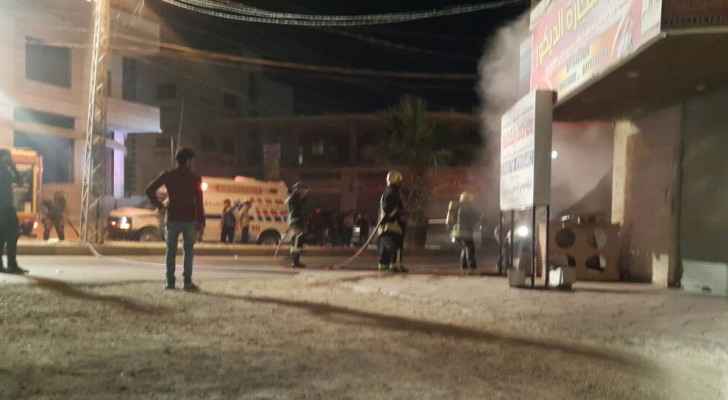 One man has been shot dead and at least one person injured on Saturday as unknown gunmen reportedly fired at a house and shops were set alight in the Irbid town of Al Sarrieh, amid ongoing tribal tensions, a security source said.

Witnesses reported that Gendarmerie and Public Security Department (PSD) forces have deployed in strength in the town, southwest of Irbid city and some 80km north of Amman, with checkpoints set up on main roads.

The dead man has been identified as a 50-year-old man, who was reportedly shot, alongside one other person, when his house was attacked by gunmen on Saturday evening. Both people were taken to hospital, where one man died of his injuries.

A security source said that PSD Director, Maj. Gen. Ahmad al-Faqih, was present in the town to oversee the security operation. Ten people have been arrested so far, according to a security source quoted by Al Anbat.

The town of Al Sarrieh has seen simmering tensions for several months, with an eruption of violence between two families in May leaving one man dead, 12 injured and several buildings set alight.

A campaign by security forces following May's violence led to the arrest of 12 people and the seizure of one firearm.

Tensions between rival tribes are reportedly a key component of the violence in Al Sarrieh. Despite its abolition in 1976, traditional tribal law still holds huge sway in the social and legal fabric of Jordan.
Tribal law often focuses on social and family disputes, often running parallel, and sometimes counter, to the Jordanian civil code.