From Syria with love: a girl captures Amman’s hearts on a street mission for Independence Day

The little girl hands out a red rose to one of Amman's policemen. 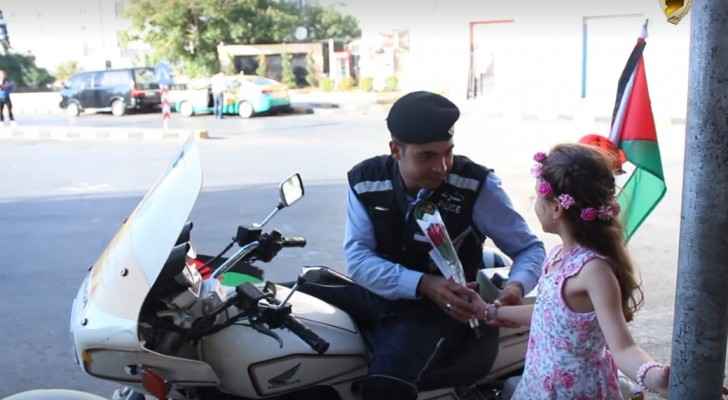 A little Syrian girl put a big smile on the resting frowning faces of Jordan’s traffic officials and road users, handing out flowers on the Kingdom’s Independence Day.

Beaming from head to toe, and wearing petals in her hair, she walked the streets of Amman in search of hardworking street shurta (cops) to present with her diplomatic commission of ‘honor’. Followed by a camera crew from the Al-Ahliyya Amman University, she handed out red roses as a symbol of love, peace and gratitude from the Syrian community to Jordan - the host country that has, to this day, received hundreds of thousands of refugees since the Syrian crisis broke out and changed lives in 2011.

Mohammad Masalmeh, a student at the university, was following the flower girl with his camera as she spread the love on the busy streets of Amman. Although the viral video was posted on Facebook on Friday, Masalmeh told Roya News that the footage had been taken on Jordan’s Independence Day in 2016, adding that he was only struck by the social media inspiration a year later.

The heartwarming gesture made a ripple in the online community as well as among the policemen in receipt of a token flower that day. One policeman spoke unguardedly to the camera: “Welcome. This is your second home, and may God bring back Syria to you.”

The Syrian community at the private Amman university launched the tender operation, aka, The Syrian Roses Campaign, in 2012. One of their first creative campaigns was to honor their college professors by giving them thank you roses.