The body of the Jordanian citizen who was shot dead by an Israeli policeman in Jerusalem. 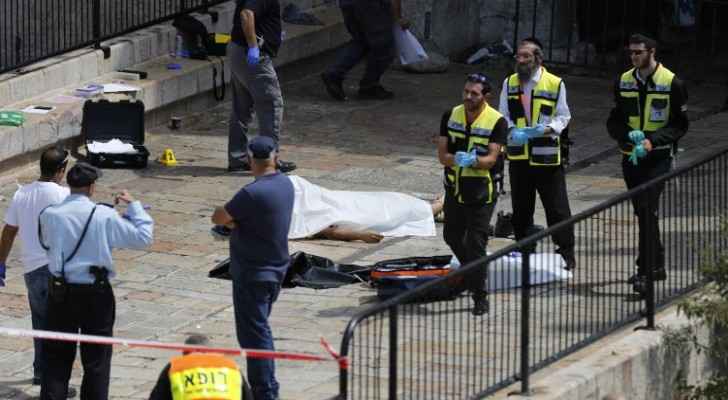 The Jordanian government held Israel accountable for shooting and killing a Jordanian citizen in the Old City of Jerusalem on Sunday. Mohammed al Kasaji, 57, was shot and killed after allegedly stabbing and injuring an Israeli policemen. Al Kasaji was dressed in a black suit in an attempt to disguise himself as an Orthodox Jew, reported Al Jazeera English.

A statement released by the Jordanian government said: ”The Israeli government, as the occupying power, bears responsibility for the shooting of a Jordanian citizen in the occupied East Jerusalem on Saturday, which led to his martyrdom.”

The statement added that Jordan “condemns as heinous the crime committed against the Jordanian citizen and demanded Israel to reveal the full details of the crime.”

In response to Jordan, the Israeli Prime Minister’s office issued a statement: “It is outrageous to hear the support that the Jordanian government spokesman gave to the terror attack. It’s about time that Jordan stops this double game. Just as Israel denounces terror attacks in Jordan, so must Jordan denounce terror attacks in Israel. Terrorism is terrorism, no matter where it is.”

Al Kasaji, who is of Palestinian origin, arrived in Israel on a tourist visa one week before the attack claimed his life. According to Maan News, a witness said that “while Israeli medics arrived within minutes and treated the injured police officer, the attacker was left on the ground for 45 minutes without any medics coming near to him, until the slain man was finally wrapped in a plastic bag and evacuated from the site.”

The Israeli police relaxed its open-fire regulations in December 2015. This led many human rights organizations to condemn the Israeli police for opening fire with live ammunition on Palestinians suspected of posing a danger on Israelis, without detaining them through non-lethal means first.

No new measures to be taken following increase in COVID-19 ....

No new measures to be taken following ....