South African activist Laloo Chiba, who was imprisoned on Robben Island for eighteen years, stands with a fellow protester during a 24-hour hunger str 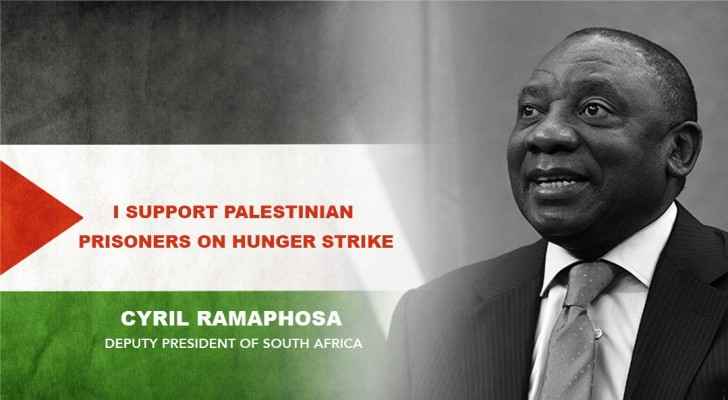 Dozens of South African officials, activists and public figures have stood in solidarity with some 1,500 Palestinian prisoners on hunger strike in Israeli prisons, by hosting a 24-hour hunger strike of their own.

It appears his words have not been forgotten, and the strike saw overwhelming support in South Africa. Deputy President Cyril Ramaphos and a number of high profile South African figures took part, expressing solidarity and support for the Palestinian prisoners who entered the 29th day on hunger strike, calling for an end to solitary confinement, medical negligence, the denial of family and lawyer visitations, and internment without charge or trial under administrative detention.

‘The solidarity hunger strike in South Africa is aimed at raising awareness about the conditions of Palestinian political prisoners and their families , it is also to highlight the role of multinational corporations and companies that are directly and heavily complicit in the Israeli prison system and broadly the occupation,’ Kwara Kekana, from BDS South Africa, told Roya.

The hunger strike coincides with Palestinian and international protests to mark the 69th anniversary of the Nakba, which saw thousands of Palestinians forced to flee from their homes during the 1948 Palestine war. Many South African's have since compared the Israeli occupation and oppression of Palestinians with their own country's history of apartheid and racial discrimination.

‘To many of us our solidarity in this campaign is very personal because of our own experience under Apartheid,’ said Nomaindia Mfeketo was one of the South African ministers partaking in the hunger strike.