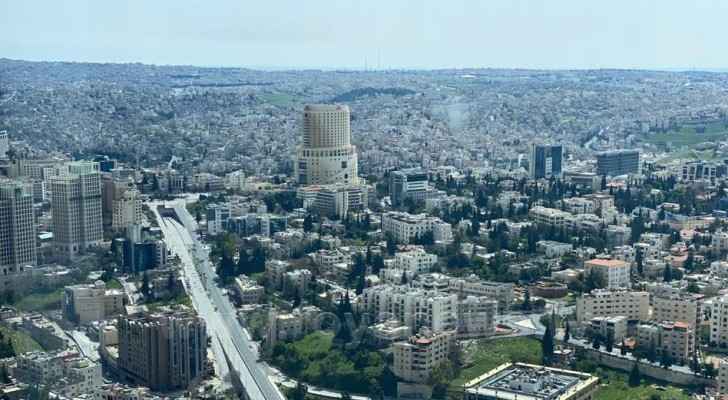 Today is the fifth day of the curfew imposed in Jordan as part of the government's precautionary measures to fight coronavirus.

The coronavirus caseload in Jordan has reached 153, with 26 new cases recorded yesterday, the Minister of Health, Saad Jaber announced during a press briefing last evening.

Jaber said that among the newly reported cases are 12 people who had attended the wedding in the northern city of Irbid, three cases had come from the United Kingdom, one of whom was in quarantine in a hotel, four cases have contracted the disease from patients, and one Spanish national came from Romania on March 10. Also, a case came from the U.S. ten days ago, and five others contracted the disease from one of the patients that in turn had got the virus from a nurse at the Al-Bashir Hospital in Amman.

In a joint press briefing with the Minister of State for Media Affairs, Amjad Adieleh, at the National Center for Security and Crisis Management (NCSCM), the Minister pointed out Tuesday evening, that the increase in the number of cases today is due to the expansion of the medical testing and the increase of epidemiological tracking teams, stressing that the number of infections in Jordan is "still a non-dangerous indicator," but it calls for more caution and adherence to home quarantine until the epidemic is overcome.

Starting today, groceries and minimarkets will be open from 10:00 am to 6:00 pm and until further notice.

This announcement was made during a press conference by Prime Minister Omar Razzaz yesterday at the National Center for Security and Crisis Management.

"A delivery service will be available. However, supermarkets will not open their doors to citizens for fear of gatherings," Razzaz stated.

Razzaz stressed that every citizen must go to the groceries alone and that no children or elderly people will be allowed to enter these shops, explaining that only people aged between 16 and 60 can go to the shops.

"Citizens are allowed to get their needs on foot and must leave a space of one and a half meters between each other."

"Only authorized vehicles will be allowed to move," Razzaz stressed.

"Basic foodstuff stores, vegetable and fruit shops, bakeries, pharmacies and water stores will open today after they are provided with the needed materials and goods," he confirmed.

"The Defence Order No.2 stated that a new mechanism will be announced allowing citizens to fulfill their necessary needs at specific times," he indicated.

He stated that the government is taking an important step by opening small shops in neighborhoods.

The Prime Minister added that several people have committed to the measures, while others didn't. "Our great hope is that everyone would be at a high level of awareness and commitment."

"If we see scenes of overcrowding, the shops where any violations will occur will be closed. "Either people commit to the measures or we shut down the shops."

"I fully understand the state of anxiety and tension among some of you and your need to secure your household necessities such as food, bread, water, medicine, and fuel. All state agencies are aware that the curfew is an abnormal and unusual situation," Razzaz said during the conference.

Razzaz stated that "the curfew is a situation that we have not witnessed before and has major negative and psychological repercussions. This current stage requires concerted efforts to confront the virus."

"We will not succeed without the commitment and cooperation of citizens," Razzaz said, noting that the new mechanism will allow citizens to fulfill their basic needs.