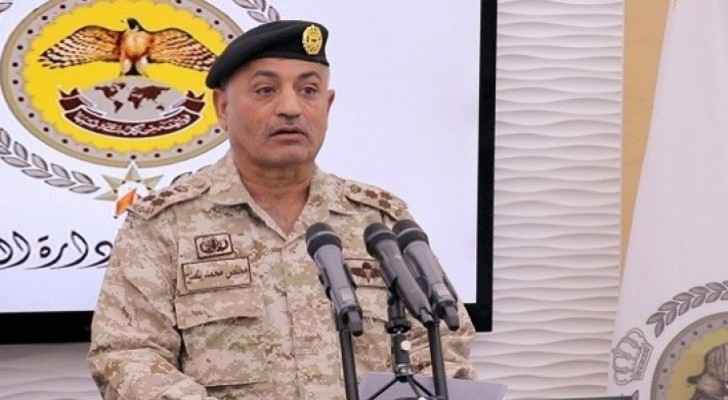 Jordan Armed Forces- Arab Army (JAF) spokesman, Mukhlis Mefleh said today that the General Command and security agencies continue, for the third day in a row, enforcing Defence Order No. 2 of 2020, which prohibits travel and movement under a nationwide curfew, while ensuring that daily life is not disrupted.

He added during a press briefing at the National Center for Security and Crisis Management that the newly-created coronavirus Crisis Management Operations Room continues to receive calls from citizens, and had dealt with all of them and successfully tackled them through the close coordination between the various agencies concerned "to try to overcome all the difficulties facing the citizens in line with plans to curb the spread of the coronavirus."

Mefleh said that 880 curfew violations were recorded during the last 24 hours, which were dealt with according to the issued regulation, as disinfection teams of the Royal Engineering Corps continued their tasks as requested.

He also said that Civil Defense Department crews have dealt with about 6,000 medical emergency cases and carried out a disinfection and sterilization operation at three buildings, while, as part of the preventive measures, the GAF Command posted stay-at-home and comply-with-curfew instructions on social media "for their positive impact to stop the spread of coronavirus."

Mefleh called on the citizens to heed the instructions "to move from the containment phase to a reassuring situation" over the coming weeks, thanking the public for their awareness and commitment and for relying on official sources for information, shunning rumors and refraining from circulating videos that harm the security agencies and their role to keep security and order.

He also commended the efforts of the various security forces, state institutions and the Greater Amman Municipality to serve the country and overcome the difficulties facing citizens.