Third day of the curfew: Empty streets, no violations reported so far

Third day of the curfew: Empty streets, no violations reported so far 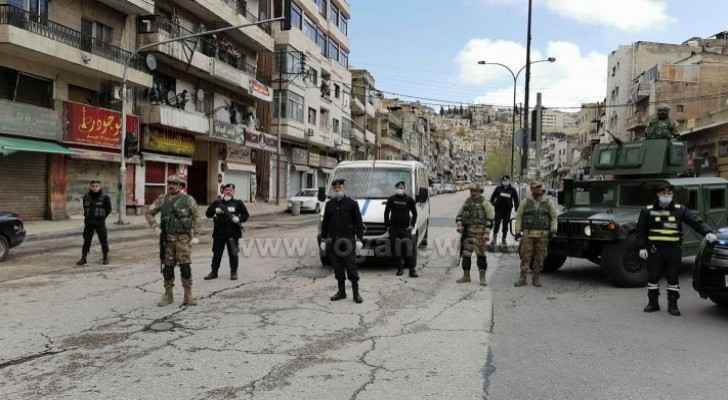 Monday, March 23, is the third day of the curfew that the government imposed in Jordan as part of its measures to limit the spread of the novel coronavirus.

So far, no violations were reported since this morning. However, at least 693 people have been arrested on the second day of the curfew, while 392 violators were arrested on the first day.

Spokesman for the Public Security Directorate (PSD) said the violators will be detained inside King Talal School in Zarqa governorate and Hassa Secondary School for Military Culture, in coordination with the Jordan Armed Forces-Arab Army (JAF).

The coronavirus caseload has so far reached 112, with 13 new cases recorded yesterday, the Minister of Health, Saad Jaber announced during a press briefing this evening.

-An Iraqi girl, who had direct contact with her infected father

-Six people who had direct contact with an infected nurse. Among the six people is an 83-year-old woman whose health condition ranges between moderate to critical

Minister Jaber confirmed that 34 infected people have been taken to the quarantine center at Prince Hamzah Public Hospital.

On the infected citizen who tested negative in Irbid, Jaber said that he will be out in "home quarantine", explaining that "we all should commit to home quarantine."