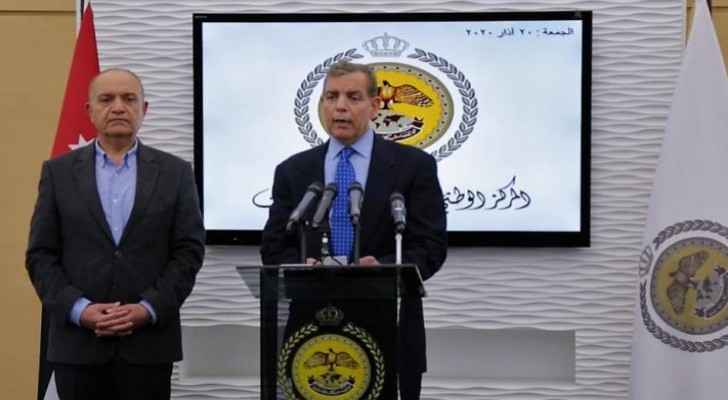 The coronavirus caseload has reached 112, with 13 new cases recorded today, the Minister of Health, Saad Jaber announced during a press briefing this evening.

-An Iraqi girl, who had direct contact with her infected father

-Six people who had direct contact with an infected nurse. Among the six people is an 83-year-old woman whose health condition ranges between moderate to critical

Minister Jaber confirmed that 34 infected people have been taken to the quarantine center at Prince Hamzah Public Hospital.

On the infected citizen who tested negative in Irbid, Jaber said that he will be out in "home quarantine", explaining that "we all should commit to home quarantine."

For his part, the Minister of State for Media Affairs, Amjad Adaileh, said that the government work teams and the crisis cell are still discussing mechanisms for delivering the necessary basic needs to citizens, such as bread, foodstuff, medicines, etc.

"We will announce these mechanisms as soon as they are agreed upon, either tonight or tomorrow," he confirmed.

He explained that "allowing citizens to leave at specific hours will lead to overcrowding, which contradicts the precautionary and preventive measures that we have taken."

"The next two weeks are crucial to restricting the spread of the virus, and the primary responsibility lies with citizens, in terms of adhering to the curfew order, the precautionary measures and safety and health instructions to limit the spread of the epidemic."

"Preliminary data indicates that the curfew may last for weeks, and therefore we stress the necessity of getting used to a new lifestyle, living with this situation, and being satisfied with the least potential and basic needs," Adaileh confirmed.

"700 people have violated the curfew order today, which is higher than the number of violations recorded on the first day of the curfew," Adaileh said, stressing that the necessary legal measures were taken against them, and they were detained in three locations allocated in the northern, central and southern regions of the Kingdom.

He reaffirmed that security services will deal firmly with any breach of the curfew, describing such practices as "unacceptable disregard".

He called on cancer and dialysis patients to show their ID cards when they need to go to a hospital or contact the Civil Defense Directorate (CDD).

Read more: Government: Curfew will not be lifted on Tuesday