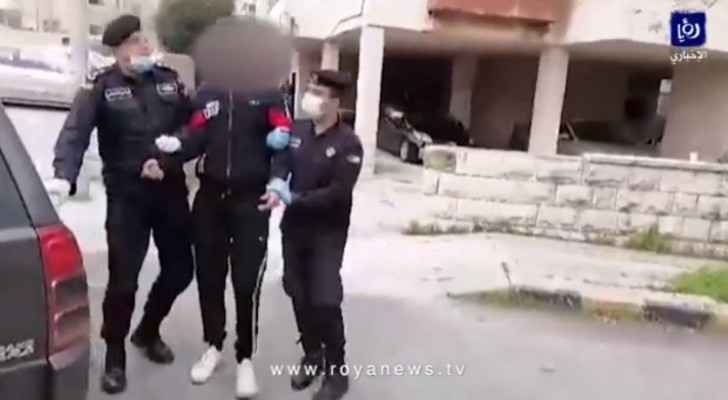 On the second day of the curfew, police officers have arrested a citizen in Amman for breaching the anti-coronavirus orders.

According to Roya's correspondent, the citizen was seen driving his car in an area in Amman when police attempted to stop him. However, he fled immediately.

After a short chase, police were able to arrest the violator and the necessary legal action will be taken against him.

On the first day of the curfew, police patrols, deployed across the Kingdom, arrested 392 violators.

The media spokesman for the Public Security Directorate (PSD) confirmed that the violators were transferred to the relevant security centers to take the necessary legal measures against them.

He also affirmed the Defence Order will be applied thoroughly, and whoever violates it will be apprehended and will face legal action, calling on all to stay home.

For his part, the Minister of Justice, Bassam Talhouni, confirmed that people who were arrested for violating the curfew decision will be referred to the public prosecutor and then to court.

In a phone call with Roya yesterday, Talhouni reaffirmed that those who violated the curfew decision shall be imprisoned for a year.

"All Jordanians should stay home to limit the spread of coronavirus in the Kingdom," Talhouni confirmed.

"Today, all Jordanians have a national responsibility," Talhouni said, noting that overall there was a full commitment by Jordanians in all governorates.

Also read: Defence Minister: Curfew violators shall be referred to the public prosecutor, then to court