As Jordan witnesses the second day of the curfew, here's a wrap up of the first day

Army units deployed in the streets during the curfew 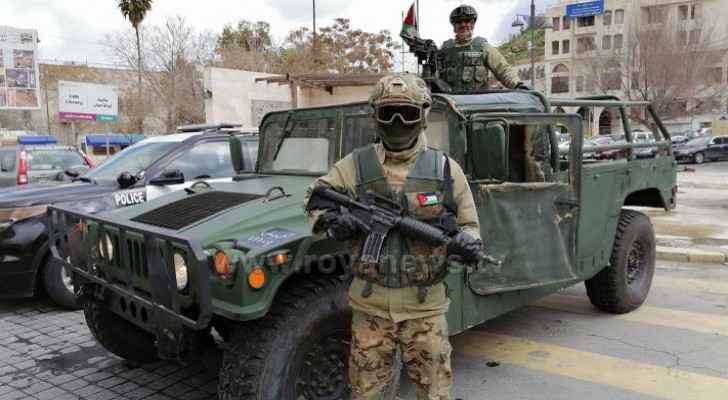 Today is the second day of the curfew that the government imposed in Jordan as part of its strict measures to limit the spread of the novel coronavirus.

A large number of Jordanians showed their commitment to the instructions and stayed home during the first day of the curfew, while a few of them didn't.

Police patrols, deployed across the Kingdom, arrested 392 violators on the first day of the curfew.

The media spokesman for the Public Security Directorate (PSD) confirmed that the violators were transferred to the relevant security centers to take the necessary legal measures against them.

He also affirmed the Defence Order will be applied thoroughly, and whoever violates it will be apprehended and will face legal action, calling on all to stay home.

So far, 99 coronavirus cases were confirmed in Jordan, including the citizen who recovered, the Minister of Health, Saad Jaber, announced during a press briefing last evening.

The Minister confirmed that 15 new cases were reported yesterday.

The infected are 78 from Jordan, six from Iraq, six from France, three from the United Kingdom, three from Lebanon two from the Philippines and one from Argentina.

"The increase in the number of cases is a dangerous indicator and is a sign that people are not abiding by the precautionary and preventative instructions," Minister Jaber said.

He called on citizens to keep a social distance to prevent the spread of the virus.

Bakeries, pharmacies to provide services through delivery during the curfew

During the press briefing yesterday, the Minister of State for Media Affairs, Amjad Adaileh, said that a number of pharmacies and bakeries will be open during the curfew with delivery services.

"We will be checking on all the needs of citizens and we must coexist with the curfew during the coming days and weeks," Adaileh confirmed.

He added that the government is considering to give special permits for dialysis patients.

"The government announced the opening of 45 gas stations, as of tomorrow, Sunday, March 22, for the purpose of supplying vehicles belonging to working institutions, and holders of permits whose nature of work requires so, Adaileh said.

He highlighted that the opening times of the stations will be from 6:00 am - 6:00 pm, as the government is considering opening more stations in the coming days.

"We decided to allow the movement of liquefied gas transport tanks and gas distribution vehicles, in addition to allowing the movement of loaded and empty trucks, starting Sunday, March 22, to assist in commercial transport within the Kingdom in relation to the provision of food and goods," he added.

Hydroxychloroquine, an old malaria drug, to be used as a treatment for coronavirus in Jordan

Spokesman for the national committee for epidemics Nathir Obaidat has revealed this morning details on the Jordan Food and Drug Administration (JFDA)'s decision to approve on using "hydroxychloroquine" as a treatment for people with coronavirus in Jordan.

"The results of the drug use have proven its effectiveness, as studies have shown that there is a positive effect of the vaccine on corona patients injected with it," Obaidat exclusively told Roya.

He pointed out that the committee has always been trying to follow up on new developments regarding the available corona treatments to limit its spread, which prompted it to search and discuss the "hydroxychloroquine" drug with the various official health authorities.

Obaidat explained that the "hydroxychloroquine" drug is an old malaria drug, stressing that the drug is available in Jordan and its export has been banned.

"The committee cannot directly use the drug for the COVID-19 patients until after certain procedures, which were actually done through a meeting with the various official health authorities to discuss protocols of its use in Jordan, after which it was agreed to give it to corona patients in the Kingdom," he stated.

Obaidat warned that it cannot be used by prescriptions from pharmacies.

Earlier last night, the JFDA Director, Dr. Hayel Obaidat, had stated that the use of "hydroxychloroquine" as a drug for treating corona patients in Jordan, had been approved at the request of the epidemics commitee of the Ministry of Health.

He added that the use of this drug was approved during a meeting held yesterday and attended by the Director of the Royal Medical Services, Brigadier General Dr. Adel Wahadneh, the spokesman for the committee, Nathir Obaidat, and representatives of the Drug Studies Committee at the Ministry of Health.

The following video shows empty streets in Jerash this morning.

Health Minister: Coronavirus incubation period could be as ....