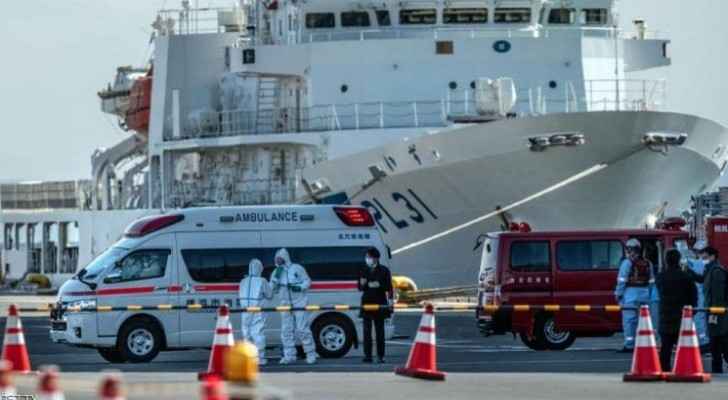 The Japanese government on Thursday said two people from the cruise ship Diamond Princess berthed in Japan, both in their 80s, have died from coronavirus infections and that another two government officials have tested positive for the infection.

More than 620 passengers aboard the cruise liner, which is carrying about 3,700 people, have been infected.

The two passengers were an 87-year-old man who suffered from heart ailments and bronchitis, and an 84-year-old woman. Both tested positive for the virus although the woman's cause of death was listed as pneumonia, the health ministry said.

Japanese authorities added that one health ministry official and another from the Cabinet Secretariat were confirmed to be infected with the coronavirus after both had spent time working on the Diamond Princess.
Three officials had previously been infected.

The huge vessel moored in Yokohama near Tokyo is easily the biggest coronavirus cluster outside the Chinese epicenter.

On Wednesday, 443 passengers disembarked after testing negative for the COVID-19 virus and not showing symptoms during a 14-day quarantine period. The complete removal of the passengers was expected to take at least three days.

More passengers left the ship on Thursday, packing into yellow buses and leaving for stations and airports for home.

Japan has well over half the known cases outside China due to the ship infections and the rapid spread of the virus with the quarantine operation sparking criticism of authorities just months before Tokyo is due to host the Summer Olympics.

Questions are increasingly being asked as to why former Diamond Princess passengers are able to roam freely around Japan's famously crowded cities, even if they have tested negative.

"Is it really safe to get off?" screamed a headline in the Nikkan Sports tabloid.

The paper quoted a passenger who said he was tested on February 15 and left four days later.

The Diamond Princess was quarantined on February 5 when a passenger who left in Hong Kong was found infected with the virus.

Passengers were confined to cabins except for brief trips on deck wearing masks and gloves, when they were told to keep their distance from others.

But a specialist in infectious diseases at Kobe University rocked the boat with a video slamming "completely chaotic" quarantine procedures onboard, in rare criticism from a Japanese official.

"The cruise ship was completely inadequate in terms of infection control," said Kentaro Iwata in videos he has since deleted, saying "there is no need to discuss this further".

The videos had been viewed more than a million times in Japanese and hundreds of thousands of times in English.

Speaking to reporters on Thursday, Iwata said he had heard from a colleague on board that the quarantine procedures had improved.

"I think that because of the improvement, the risk of secondary infection has been reduced for the passengers. It remains for the crews," he said.

Meanwhile, in China, health authorities reported the lowest number of confirmed cases since late January, partly because of a change in diagnostic criteria for patients in Hubei province, the epicentre of the outbreak.

China had 394 new confirmed cases on Wednesday, the National Health Commission (NHC) said, sharply down from 1,749 cases a day earlier and the lowest since January 23.

That brings the total accumulated number of confirmed cases in mainland China to 74,576.

Just how cases are diagnosed and confirmed has had a big impact on official tallies of cases, and changes in the method have raised questions about the extent to which daily tallies accurately reflect the state of the outbreak.

The health scare has cascaded across Southeast Asia, with cases recorded in the Philippines, Singapore, Thailand and Vietnam.

The Philippines, Singapore and Vietnam have restricted flights from mainland China and suspended visa-free arrivals as health screening ramps up at entry points.

Thailand, which has imposed no such restrictions, reported a 90 percent slump in arrivals from the mainland this month, a gut punch to an already beleaguered tourist sector which makes up nearly a fifth of the economy.