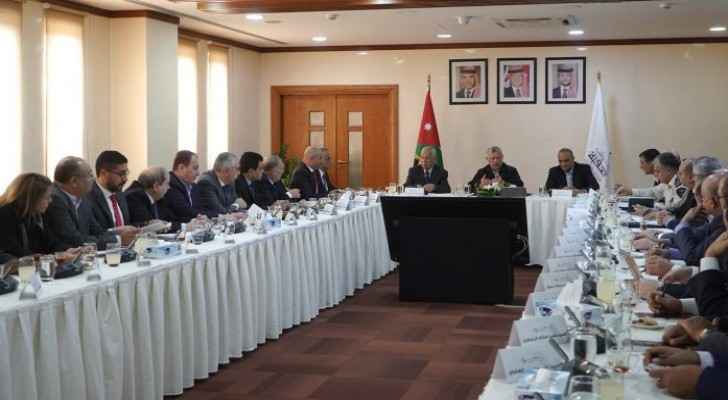 His Majesty King Abdullah resumed on Sunday, February 16, his tour of the south, which commenced three weeks ago to focus on local development, improving citizens' standard of living, and developing the southern region through supporting tourism and utilizing state-owned land for agriculture and development.

In Aqaba, King Abdullah met with the investment and tourism taskforces in the governorate—which include representatives from the public and private sectors and civil society and were formed upon His Majesty’s directives—to follow up on their recommendations and proposals.

Also in Aqaba, His Majesty visited the Aqaba Castle, Sharif Hussein bin Ali's house in the city, and the proposed site of the aviation museum.

The King, during his meeting with the tourism and investment taskforces at the Aqaba Special Economic Zone Authority (ASEZA), underscored the importance of setting a clear timeframe and identifying the priorities of action plans for the two sectors.

During His Majesty’s most recent visit to Aqaba, four taskforces were formed to develop the investment, tourism, transport and energy sectors.

The King stressed that all must propose ideas and recommendations to develop a vision for the city of Aqaba for the coming three years, noting the importance of coming up with solutions for the transport and energy sectors.

His Majesty also said he would be visiting Petra soon to examine its development plan.

During the meeting, ASEZA Chief Commissioner Nayef Bakhit, who heads the investment sector taskforce, presented its outputs, which included means for developing and stabilizing legislation and streamlining investment procedures.

For his part, ASEZA Commissioner for Economic Affairs Sharhabeel Madi, who heads the tourism taskforce, presented its outputs on the plan for developing the sector, noting it will focus on enhancing the tourist experience, improving the quality of services, empowering the local community, and preparing a tourism-centric calendar of events.

Discussions at the meeting covered ways to develop the tourism and investment sectors, and the importance of coordination and consultation among the taskforces and the local community.

Flags to fly at half-mast in Jordan to mourn Omani ....