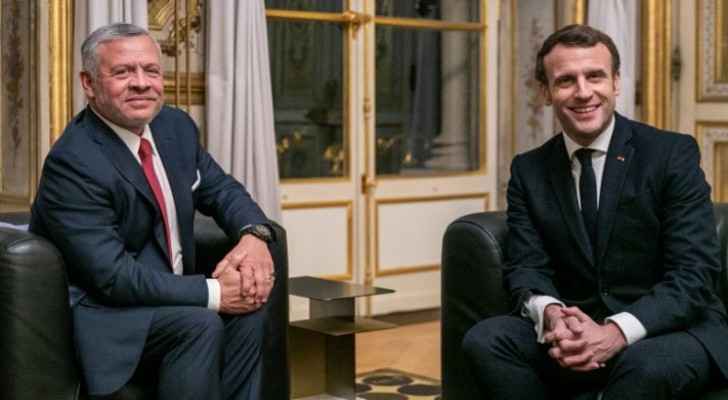 During bilateral talks, which were followed by expanded ones at the Élysée Palace attended by His Royal Highness Prince Ali bin Al Hussein, the importance of advancing economic, military, and security cooperation was stressed, in addition to the need to maintain consultation and coordination between Jordan and France on issues of mutual concern.

King Abdullah expressed appreciation for France’s support to Jordan in a number of development programs.

The expanded talks, which continued over a working dinner, covered efforts to reach political solutions to regional crises, with His Majesty and President Macron stressing the need to exert all efforts to prevent escalation or a rise in tensions.

Discussing the Palestinian cause, the King underscored the importance of ending the Palestinian-Israeli conflict on the basis of the two-state solution, guaranteeing the establishment of an independent Palestinian state on the 4 June 1967 lines with East Jerusalem as its capital.

Turning to the Syrian crisis, the King reaffirmed the need to reach a political solution that safeguards the territorial integrity of Syria and the unity of its people, while guaranteeing the safe, voluntary return of refugees.

In addition, the talks covered efforts to fight terrorism within a holistic approach, and Jordanian-French cooperation in this regard through the Aqaba Process meetings.