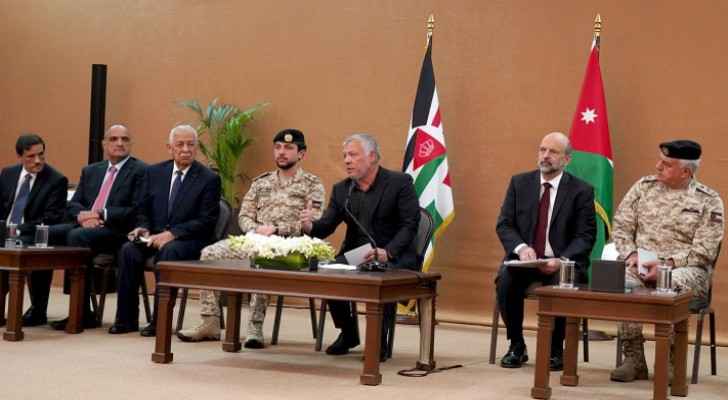 His Majesty King Abdullah, accompanied by His Royal Highness Crown Prince Al Hussein bin Abdullah II, met with representatives and leading figures from Abbad tribes at the Royal Hashemite Court on Monday, as part of the Basman Forum meetings.

Speaking at the meeting, attended by Prime Minister Omar Razzaz, King Abdullah welcomed the dignitaries and representatives of Abbad tribes.

His Majesty said the economic programme launched last year by the government will continue this year, noting that the focus in 2020 will be to create job opportunities for young Jordanians, reduce unemployment, and improve citizens’ living standards.

The King added that a government team will reach out to local communities through field visits within a week, and the Royal Hashemite Court will be providing support.

During the meeting, leading figures and representatives of the Abbad tribe expressed their appreciation for His Majesty’s ongoing outreach to all Jordanians and his keenness to address their needs.

Speakers expressed their gratitude for the King’s efforts to improve citizens’ living standards and alleviate unemployment.

They said they stand united behind His Majesty in safeguarding the homeland, protecting its assets and achievements, and defending its stability and security against threats.

The speakers lauded the King’s directives to the government to proceed in merging the General Directorate of the Gendarmerie and the Civil Defence Directorate to become part of the Public Security Directorate.

They also commended His Majesty’s decision to terminate the Peace Treaty annexes on Baqura and Al Ghamr and reaffirm Jordanian sovereignty over them, praising the King’s steadfast position on the Palestinian cause, and efforts to protect Islamic and Christian holy sites in Jerusalem, in line with the Hashemite Custodianship.

They also pointed to His Majesty’s relentless efforts to defend Arab and Islamic causes at the international stage, and maintain peace and security in the region and the world.

For his part, Prime Minister Razzaz said the government will study all the proposals presented at the meeting, stressing that young Jordanians remain the priority.

The prime minister highlighted the importance of creating employment opportunities for youth, noting that the government is considering a proposal to distribute plots of agricultural land to young people, upon Royal directives.

He also spoke about the measures taken by the government in education, healthcare, and public transport.