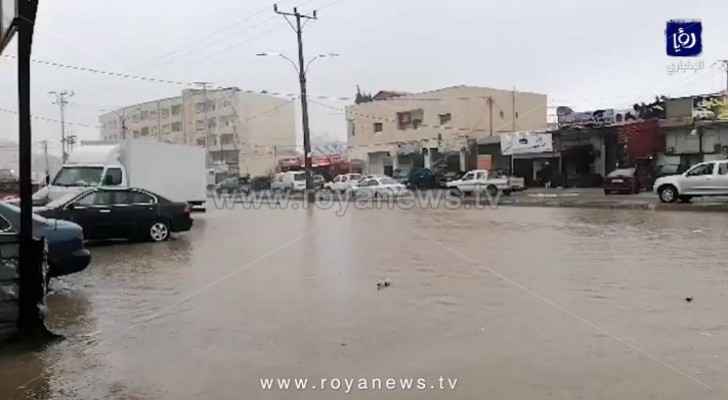 Heavy rainfall has been raging in the Kingdom since last night, resulting in a number of shops in Ibbin, Ajloun to be raided by rainwater.

According to Roya's correspondent, several vehicles are have been stuck on the road as a result of the high water level.

The impact of the cold air mass is expected to deepen in the next couple of hours, as more cold air flows will come from eastern Europe towards the eastern Mediterranean and the Kingdom, according to Arabia Weather.

Heavy rainfall is predicted in the next few hours with thunder, lightning, heavy hail showers and strong winds over the northern and central regions of the Kingdom as well as some parts of the southern highlands.

The lightning indicator shows that more thunder is expected to boom in the sky over the Mediterranean Sea and the coasts of Palestine, Lebanon and Syria.

Rainfall and hail showers are predicted to last until early Friday and Friday afternoon, as the weather will be cold, rainy and stormy.

Arabia weather warns of flash floods in the valleys and lowlands and the risk of low visibility over the highlands due to fog.