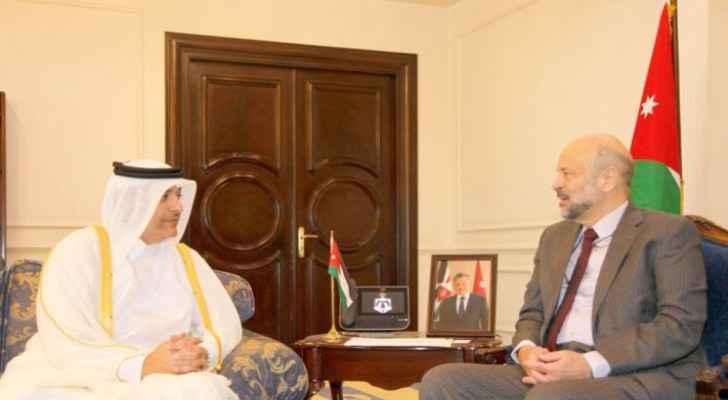 During the meeting, Razzaz stressed the importance of exchanging expertise between the two countries to enhance bilateral ties.

Razzaz said that Jordan is keen on enhancing "the historical relations" with Qatar, and expanding cooperation in the various fields, in a manner that benefits the two brotherly countries and their peoples.

He thanked Qatar for standing with Jordan, and allocating 10,000 jobs for Jordanians in the Gulf Arab state, noting the qualified and skilled Jordanian manpower and the progress made in the Kingdom's various sectors, including remote services for companies and key institutions.

Batayneh spoke about areas of cooperation between the labor ministries of both countries, mainly attracting Jordanian labor and human resources management.

The two sides agreed to open a Qatari center in Amman in the coming months to facilitate visa procedures for those who secure jobs in Qatar and institutionalize the process of hiring Jordanians and job contracts with the public or private sectors.

The Qatari minister expressed his country's keen interest to enhance cooperation with Jordan on various issues and noted the level of coordination between the labor ministries in the two countries. He said Qatar is willing to raise job opportunities for Jordanians and utilize Jordanian expertise in various Qatari projects.

The meeting was attended by Labour Minister Nidal Batayneh and Chairman of the Parliamentary Labour Committee, MP Khaled Abu Hassan.