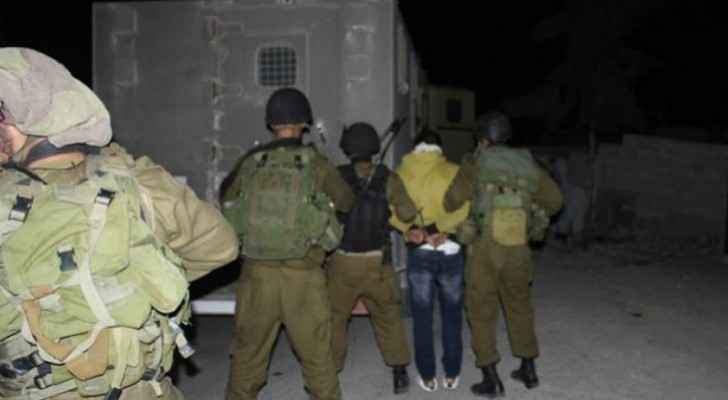 Security forces confirmed that seven Palestinians were detained from the southern West Bank district of Hebron.

Elaborating on the raid into Beit Ummar, Muhammad Awad, a local media activist, said that scores of gun-toting soldiers raided the town, where they opened fire on civilians’ houses and ransacked several others, turning them upside down.

The soldiers ultimately detained a former prisoner and two brothers from the town.

Meanwhile, six Palestinians were rounded up from the Jerusalem district.

Local sources confirmed that Israeli police shortly before dawn rounded up three Palestinians after storming their families’ houses in the East Jerusalem neighborhood of Silwan.

Another Palestinian was detained late overnight following violent confrontations with a police force in Batn al-Hawa neighborhood, which is part of Silwan.

Police also conducted a raid in Jabal Az-Zeitoun neighborhood, resulting in the detention of a Palestinian teen.

In the northern West Bank, the Palestine Prisoners’ Society (PPS) confirmed an Israeli military raid in Deir al-Ghusun town, north of Tulkarem city, resulting in the detention of a Palestinian.

Soldiers broke into and thoroughly searched several houses in the village and threatened to kill a former prisoner if he does not turn himself to Israeli military.

Israeli forces frequently raid Palestinian houses almost on a daily basis across the West Bank on the pretext of searching for “wanted” Palestinians, triggering clashes with residents.

These raids, which take place also in areas under the full control of the Palestinian Authority, are conducted with no need for a search warrant, whenever and wherever the military chooses in keeping with its sweeping arbitrary powers.

According to Palestinian figures, roughly 5,700 Palestinians -- including numerous women and children -- are currently languishing in Israeli detention facilities.