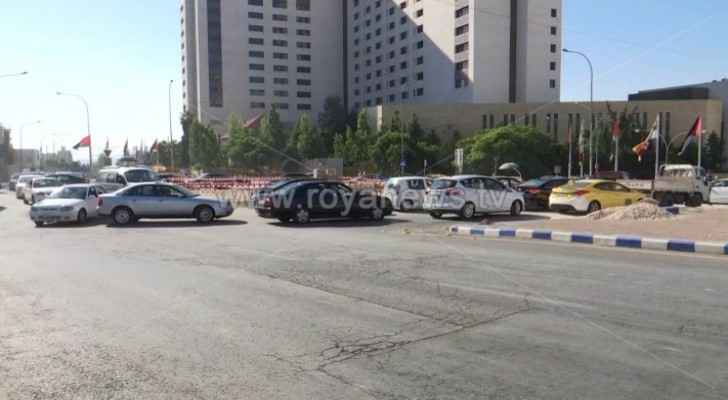 Amman Mayor Yousef Shawarbeh said that the removal of the 5th circle in Amman and the installation of traffic lights instead, are the result of a joint study conducted by the Greater Amman Municipality (GAM), in coordination with the Central Traffic Department (CTD) to deal with the traffic density on the roundabout and to alleviate traffic congestion.

Shawarbeh pointed out that the work will last for six months, after which the situation will be assessed based on specific standards and GAM will decide whether to install traffic lights or to find another solution.

This came during an inspection tour made by Shawarbeh to check on the progress of preparations for removing the circle on Tuesday morning, September 3, 2019.

Shawarbeh confirmed that the removal of the roundabout is part of Amman’s Bus Rapid Transit (BRT) project.

"The removal of the roundabout comes within the tenders of the BRT and road and traffic improvements in Sharif Nasser Bin Jameel Street, Al-Kindi Street, the 5th circle area, Mohammed Ali Janah Street and Princess Basma Street," he mentioned.

Shawarbeh said the traffic detours during the removal of the circle and the installation of the traffic lights won't be at the same level of the efficiency of the streets in the Kingdom.

He pointed out that all road works in the Kingdom require road detours.

First phase of detours on Al Hizam road between Amman, ....

First phase of detours on Al Hizam road between ....

First phase of detours on Al Hizam road between ....