Palestinian leadership decided to cancel all agreements with Israel

Saeb Erekat, secretary general of the Executive Committee of the Palestine Liberation Organization 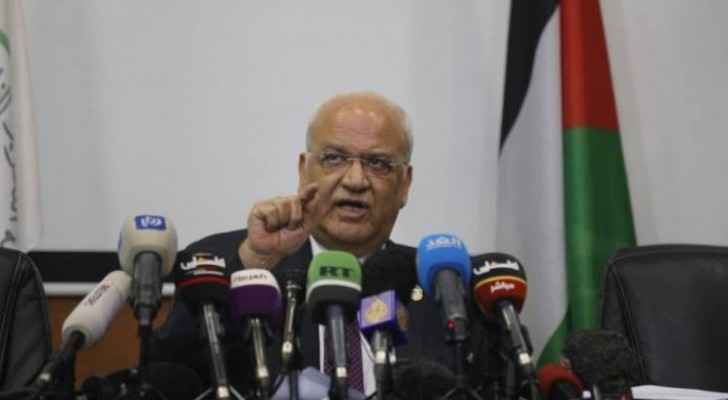 Saeb Erekat, secretary general of the Executive Committee of the Palestine Liberation Organization (PLO), said the Palestinian leadership decided to put in place mechanisms to cancel all agreements with Israel, adding that President Mahmoud Abbas decided to give full compensation to all families affected by the demolition of their homes in Wadi al-Hummus area, in occupied East Jerusalem.

During a press conference held following an emergency PLO meeting in Ramallah, Erekat said that a request for a meeting of the United Nations Security Council on this issue was approved and said that the leadership has decided on cessation of dealing with the Israeli courts.

He said that what has been committed today in occupied East Jerusalem in Sur Baher from house demolitions is a war crime par excellence and a crime against humanity under the Rome Statute of the International Criminal Court.

He said that upon the instructions of President Mahmoud Abbas, the Ministry of Foreign Affairs and Expatriates submitted a complaint at the international Criminal Court (ICC) against Israel’s demolition of homes in Sur Baher.

Erekat stressed that there is no justification for ICC to continue with any delay. “All we have been asking for is a complete appendix to the crime that has been committed.”

He requested Michelle Bachelet, United Nations High Commissioner for Human Rights, to not hesitate in issuing the United Nations database of companies operating with the Israeli colonial-settlement system.

To connect with credit registry system, ....