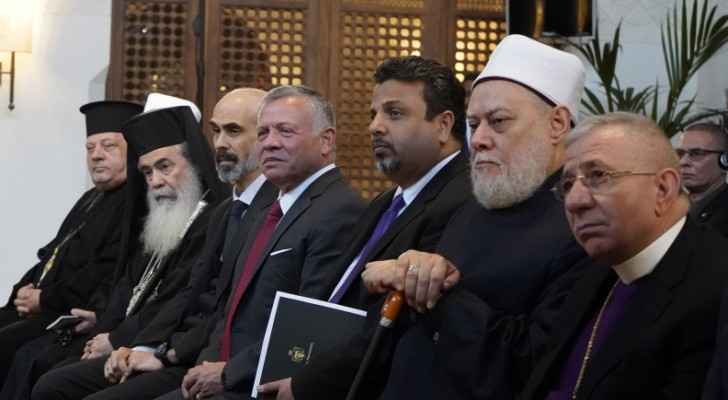 At the ceremony, attended by His Royal Highness Prince Ghazi bin Muhammad, His Majesty’s chief adviser for religious and cultural affairs and personal envoy, King Abdullah presented awards to the winners.

Launched by the Royal Aal al-Bayt Institute for Islamic Thought in 2013, the annual prize is awarded to three activities or texts that best promote the values connected to the World Interfaith Harmony Week, which is celebrated in the first week of February and was launched by His Majesty and unanimously adopted by the UN General Assembly in 2010.

The first prize went to the Cape Town Interfaith Initiative for the activity “Love of Neighbour - our Prayers for our City”, co-hosted with Faith, Hope, Love Communities in Elsie’s River, with the aim of taking prayers from places of worship to people in troubled areas.

The second prize was awarded to Interreligious Committee of Rome for its “Interreligious Manifesto of the Rights in End of Life Path”, which was signed by religious leaders from different faiths to ensure religious and spiritual support for sick people at hospitals, hospices or at home.

The third prize was jointly awarded to URI Cooperation Circle Brasilia for the Public Audience in the Legislative Chamber of the Federal District of Brazil and the SUNFO Global Federation for its Campaign for Interfaith Harmony in Sri Lanka.

The World Interfaith Harmony Week builds on the 2007 “A Common Word” initiative, which declared the common ground between Islam and Christianity based on the two great Commandments of “Love of God, and Love of the Neighbour”, which lie at the heart of the three monotheistic faiths.

Royal Hashemite Court Chief Yousef Issawi, Adviser to His Majesty and Director of the Office of His Majesty Manar Dabbas, and a number of Muslim and Christian religious leaders attended the prize ceremony.