Hassan al-Kontar upon landing in Canada on Monday. (NBC News) 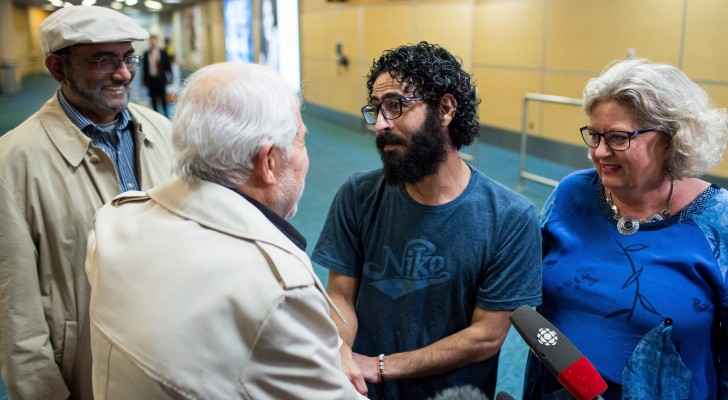 Hassan al-Kontar, the Syrian man who was stranded at an airport in Kuala Lumpur, Malaysia, for the past seven months, has been granted refugee status in Canada.

The 37-year-old landed in Vancouver Airport on Monday night, November 26, where he received permanent residency, thanks to the efforts of Canadian human rights activists.

Kontar caught the attention of the Canadian rights group on social media, where he documented his plight on a daily basis since getting stuck at what became his new "home."

The Canadian volunteers filed a refugee application on behalf of Kontar in April, which usually has a processing time of up to 23 months, according to Al Jazeera.

Last month, before his paperwork for asylum was cleared in Canada, Kontar got arrested by Malaysian police, who held him in a detention centre and threatened to deport him back to Syria.

Kontar was working in the UAE before arriving in Kuala Lumpur International Airport's domestic transfer terminal. He was forced to leave the Gulf state in 2012 after he was refused a new Syrian passport.

At the time, he decided to travel to Malaysia, as it is one of the few countries Syrians are allowed to travel to visa-free, and because he did not want to return to Syria, where he would be forced to enlist in the army.

Kontar soon outstayed his Malaysian tourist visa and had to pay a penalty. His next option was to travel to Ecuador, but the Malaysian authorities did not allow him to board his flight.

Soon after, he travelled to Cambodia. However, he was immediately deported back to Malaysia.

Kontar has been thrilled since arriving in Canada… too thrilled to sleep.

"In real life, there are moments that are more beautiful than the dream itself."

The first thing Kontar did upon stepping out of the Vancouver airport into the rain was to breathe in his new surroundings.

"For me, walking on the street again and smelling the fresh air, it's not a normal thing: It's the sound and smell of freedom."

The largest Muslim country divided over ....

Jordan's donkeys are being tortured and PETA wants you to ....

Jordan's donkeys are being tortured and PETA ....

Jordan's donkeys are being tortured and PETA ....

Jordan's donkeys are being tortured and ....