Could the next Robin Williams, Dave Chappelle or Jerry Seinfeld be right here in Jordan? (Roya) 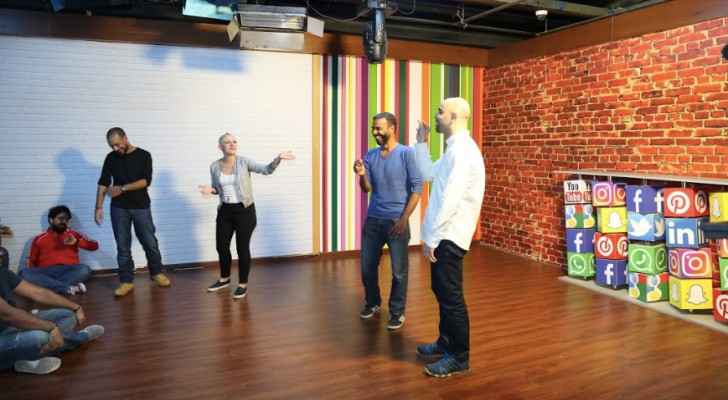 Some of us are born with a great sense of humor, while others develop one as they get older.

Jordanians have an interesting sense of humor, typically leaning towards the satirical/silly side of the spectrum. Either way, it’s bound to make you crack a smile or two.

But there’s an art to being funny, or at least to creating comedy.

For those who were once the class clown in school or who developed the ability to make people laugh in adulthood and are hoping to pursue a career in comedy, sadly, Jordan isn’t equipped with a specialist school to train and grow their talent.

Something had to change, so Roya pushed the envelope.

Last week, the Roya Academy for Media Training teamed up with The Second City Training Center, the world’s largest school of improvisational arts and part of legendary comedy institution The Second City, and the US Embassy in Amman to create a five-day improv-to-sketch program.

A group of aspiring and professional comedians signed up for the exclusive course, which took place at the Academy’s headquarters in Amman from October 12th-16th.

I attended the fourth day of the course to chat to the trainers, Jay Steigmann, Writing Faculty Program Head, and Jessica Mitolo, Writing & Improvisation Faculty from The Second City Training Center, and watch them work their magic in person.

A group of Jordan’s most famous comedians gathered in the first room. Jay had an exercise for them to try out, and I laughed from the corner of the room as I watched the funny bunch play a game of "freeze when the ‘security guard’ turns around and if he sees you then you’re ‘it.’”

When it was game over, the comedians were split into groups of their choice and asked to come up with a sketch to perform for the entire class. The results were hilarious. So hilarious that Sharif al Zoubi was rolling on the floor laughing (seriously!).

Sure, the sketches were really funny, but professional comedians in Jordan were all self-taught, which makes total sense as to why Jay had a few constructive comments for each one of them.

Her notes were right on point, logical and alerted the comedians to the techniques that must be adapted when creating comedy, to guarantee and maintain maximum laughter.

Jessica’s session involved similar exercises and her remarks were equally as constructive as Jay’s.

I might have laughed my socks off during the sessions, but did Jay and Jessica find their students as funny as I did? All I had to do was ask.

“I think Jordanians are just so funny,” Jay said, while Jessica agreed with an excited “yes.”

I asked them about their initial thoughts on comedians and comedy in Jordan.

“Initial thoughts, I think, in Jordan, but also with beginning comedians is that they hold themselves back so much, they’re not ready to take risks and play the role of the fool and joke around. This is day four and you can see that they’ve begun to take themselves less seriously and to really have fun and smile and go with it and take risks,” Jay said excitedly.

Jessica chimed in with: “It’s really fun to see that naturally they’re all having fun together and they’re naturally very funny people, so it’s been really exciting to give structures and games and tools so that comedy can happen over and over again. There’s so much natural humor there, and then to show how to focus that so it can happen on stage.” Jessica said that there has been a huge transformation in the students since day one, including many of them becoming less timid and less concerned about looking cool and trying hard to be funny.

The course was a dream come true for the amateur comedians who were lucky enough to attend. One of the students, Faisal, said that “these four days have been the best days of my whole entire life.”

Jessica and Jay told me that they tailored the course based on the comedians and their performance and what they “naturally gravitated toward” in the course.

“There are certain things that we tried and thought: ‘maybe this isn’t a shared sense of humor, this is an American sense of humor.’ And today I tailored my improv class into a storytelling class and story theatre class and the response was tremendous,” Jay said.

Jessica noted that the professional comedians in Jordan tend to work solo and not in teams.

“The professional comedians keep mentioning that so much of their work here is done solo, and so we are really emphasizing the collaboration in improv and making each other look good, that’s something that we keep on touching on: how to play with your partner and make their ideas come to life.”

Jay said that the students said on day one that they felt alone, but by day four they felt more like a group, which is “instrumental to improvisation as an art form.” I knew they thought Jordanians were funny, but I tend to like details.

“I think everyone (in Jordan) has this sense of humor, some people dry, some people gallus, but funny,” Jay said.

Jessica said that “touching on satirical content was so lovely, because all you have to do is say ‘this is where you make fun of yourself’ and they’re like ‘got it.’”

Apparently, there is a “greater sense of fatalism” to Jordanian humor.

“A lot of the humor gets a little dark,” Jay said. “People say things like ‘even our sea is dead,’ those types of things are pretty common in the themes that come through in class.” The lovely Jessica and Jay. (Via Roya)

So dark humor it is, and plenty of self-expression.

“They’re also so expressive,” Jessica noted. “I think the one thing that we spend a lot of time on at classes in Chicago is teaching people how to be big and take up space, and naturally, the students here in Jordan are very expressive and have great facial expressions and very excellent at communicating with their whole body.”

“Very animated, this is a very theatrical culture,” Jay said.

But what I really wanted to know was whether Jay and Jessica believe if any of their Jordanian students could ever make it big in the US. The students, both the pros and amateurs, enjoyed the unique course and highly benefited from it.

Well-known Jordanian comedian Odai Hijazi said that he has a learnt a lot from this course, particularly how to write comedy scripts.

“I work in theatre so I know a little bit about it, but here we were taught how to build a character and create a scene in a comedic way and also in a way that suits Jordanian humor. We have very, very few scenarists in Jordan, so this was very important to create new writers who will be able to write great comedy scripts. There is an ABC and rules to the art of creating comedy, and we were taught those here today,” Odai said.

Faisal al-Bdoor, a doctor and an aspiring comedy actor, told me that “this is my first ever comedy-related course, and the most important thing that I got out of this course was that I never thought that I could actually write a script. I never thought I had it in me. When Jessica broke it down for us, it was so simple, steps, just take one then go to two. After that and after we started practising, I thought to myself ‘I can write.’ The course is very well structured and because they’re professionals from the US, I was encouraged to attend.”

The course was more than just about comedy.

Adrienne B. Nutzman, Counselor for Public Affairs, U.S. Embassy in Amman said that “Our cultural programming is rooted in connecting Americans and Jordanians to celebrate our shared values, and in this case, our shared enjoyment of comedy. The workshop, held in collaboration with The Second City, and our Jordanian partner, Ro’ya Academy for Media Training, will not only encourage the arts as a profession and growing sector of the Jordanian economy, but it will also strengthen, advance, and foster a strong civil society and active citizenry in Jordan. We see great value in improv and comedy as a means to foster empathy and raise awareness about social issues, and are pleased to have experts from The Second City bring this approach to Jordan.”

Could the next Robin Williams, Dave Chappelle or Jerry Seinfeld be right here in Jordan?