Karabay set this record on the 20th anniversary of Troy being added to UNESCO World Heritage List. (AFP) 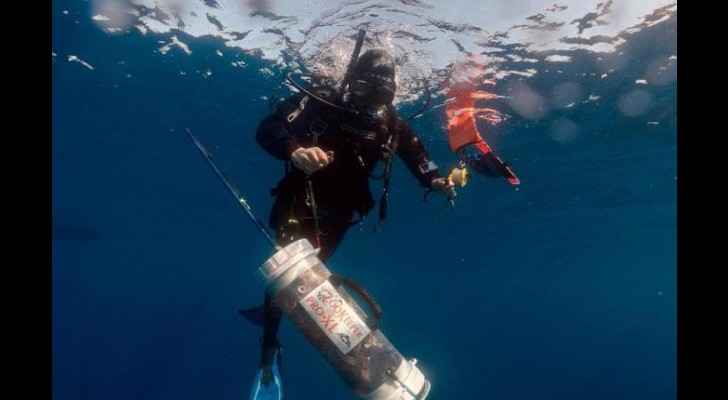 He’s no merman - although he could be - he’s a diver from Turkey who spent 30 hours and 20 minutes at the Underwater Marine Park at Gokceada Island, Turkey’s largest island.

While setting the world record for the longest open saltwater scuba dive in cold water, Seyda Subasi Gemici, who serves as Guinness’ representative in Turkey, was following closely behind.

Dubbed “Aquarium Man,” Karabay competed for the record against Norwegian diver Nils-Roar Selnes, who held the previous record at 15 hours and 10 minutes underwater in Eidkjosen, Norway in 2016.

Following his win, Karabay told reporters: "I fulfilled the promise of breaking the world record."

Diving is both an exhilarating and exhausting sport, but how did it feel to spend 30 hours underwater?

"I considered the first 10 hours an apprenticeship. In the second 10 hours, I trained as a journeyman. Because I improved myself from what I learned. Finally, I became versed in the last 10 hours," Karabay said.

Setting records is somewhat a hobby of Karabay’s, who usually likes to accomplish them on important Turkish holidays and anniversaries.

Karabay set this record on the 20th anniversary of Troy being added to the UNESCO World Heritage List.

Turkey’s Ministry of Culture and Tourism has declared 2018 as the Year of Troy.

Troy is a city that existed 4,000 years ago, and it was declared a UNESCO World Heritage site in the northwestern Anatolian region of Turkey in 1998.

In celebration of Troy’s 20th anniversary, the Turkish government is planning to establish a museum to display antiquities found by archaeologists in excavations over the years.

Rescue Diver Hareth al-Jbour moments before he died in the ....