Turkey has not given up on EU membership 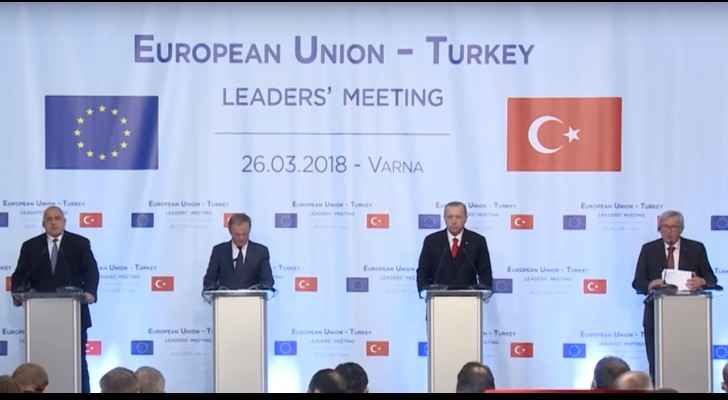 The leaders of the EU and Turkey met on Monday in order to continue the channel of dialogue and discuss issues of common interest. The summit took place in Euxinograd Residence in the Black Sea city of Varna, often referred to as the “seaside capital” of Bulgaria. The meeting was attended by Turkish President Recep Tayyip Erdogan, President of European Council Donald Tusk, Head of European Commission Jean-Claude Juncker, and Bulgarian Prime Minister Boyko Borisov.

In a press conference after the meeting the leaders made final remarks and answered questions from journalists. Among the topics discussed were Turkey’s work on securing their border with Europe, the financial installments EU will pay to Turkey in support of Syrian refugees, and the fight against terrorism.

Other issues Erdogan was keen to put on the table were the visa-free travel of their citizens to Europe and their membership application to the EU. On the other hand, EU leaders raised concerns regarding the Turkish offensive in Afrin, the treatment of journalists, and Cyprus’s natural gas exploration.

Tusk confirmed that parameters on the support for the three million Syrian refugees have been set as the EU will continue to honor the pledge of giving Turkey two installments amounting to €3 billion each. He also asked Turkey to uphold the highest standards of democracy and encouraged them to work with EU and to not infringe on human rights standards.

Tusk continued to express serious concerns in regards to Turkey’s action in the Aegean Sea and stated that good bilateral relations between Turkey and Cyprus and Turkey and Greece were essential in the discussions for Turkey’s membership in the EU. He also urged that civilians in Afrin are protected and offered proper humanitarian support.

During his remarks, Erdogan expressed hope that bad relations between the EU and Turkey are a thing of the past. He referred to Turkey’s application to join the EU in 1963 and said they have not given up on their bid and will exert efforts to match EU’s requirements and enhance relations.

Erdogan asked the negotiations on the visa-free travel of Turkish citizens to be finalized. He asked for EU support in dealing with the so called Islamic State, PKK and YPG. He continued to stress that Turkish relevant authorities had only received €1.8 billion from the three billion of the first installment and are waiting for the second installment.

In response, Juncker insisted that the € 1.8 billion were paid in accordance to the projects completed by Turkey targeting Syrian refugee healthcare, education and living centers. He stressed that according to the agreement, the money will only be paid when there are corresponding projects implemented on the ground in Turkey. He also pointed out that in March the mobilization of the second three billion instalment had been put into motion.

Juncker also thanked Turkey for decreasing the flow of refugees to Europe which had decreased by 87 percent and asked for interference in Syria to be done in accordance to international law. He called himself an advocate for negotiations for Turkey’s EU membership but stressed on the need for Turkey to improve relations with EU countries, especially Greece and Cyprus. He condemned the imprisonment of journalists and the two Greek border officers but postponed such issues for a later date.

Similarly, Borisov asserted that bilateral relations and Bulgarian demands in relation to Thracian Bulgarians would be tackled through bilateral committees which will be established for those issues. He continued to say that in his one-on-one meeting with Erdogan bilateral issues were raised and both sides had agreed that they would not take the forefront of the current discussions.

I brought to the table all issues on Bulgaria-Turkey axis: energy, Thracian Bulgarians, water management, cultural monuments and etc. Not to address bilateral issues at the #EUTurkey meeting, @RT_Erdogan and I agreed these topics to be discussed at following bilateral meetings

The summit was hosted in Bulgaria as part of their six-month presidency of the Council of the European Union. The current trio is made up of the presidencies of Estonia, Bulgaria and Austria.

EU reaffirms commitment to negotiations on basis of ....

EU reaffirms commitment to negotiations on ....