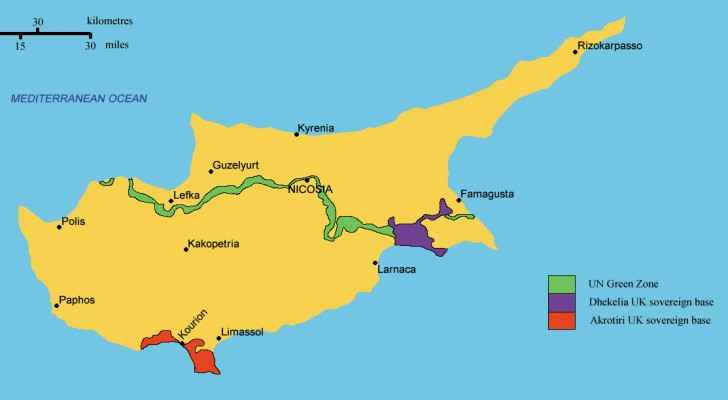 More than 40 years after Turkish troops invaded northern Cyprus, the presence of tens of thousands of soldiers on the Mediterranean island still looms large over make-or-break peace negotiations this week.

Ankara maintains more than 35,000 troops in Cyprus, and analysts say that their fate will determine whether UN-mediated attempts to reunite Greek- and Turkish-Cypriot communities are successful.

"The security issue is so important because it's linked to historic traumas," Hubert Faustmann, a political science professor at the University of Nicosia, told AFP.

The 1974 invasion of Cyprus, in response to an Athens-inspired putsch seeking union with Greece, was one of the bloodiest episodes in post-war Europe. It left hundreds dead and forced tens of thousands from their homes.

Faustmann said that the Turkish soldiers -- plus around 1,000 Greek troops -- on Cyprus today offer some comfort to the two communities.

"The Turkish-Cypriots feel they were deprived of their political rights in a violent attack from the Greek-Cypriots. The Greek-Cypriots were attacked by Turkish troops. (Both) need a safeguard against a repetition," he said.

"It's a classic security dilemma."

It is one that has scuppered previous peace drives and the issue tops the billing at UN-brokered negotiations this week in the Swiss resort of Crans-Montana.

A diplomatic source told AFP before the talks kicked off Wednesday that Turkey was willing to slash its troop presence by 80 percent in order to reach a deal.

Foreign ministry spokesman Huseyin Muftuoglu however denied this, insisting that "the information according to which our country will withdraw troops from the island as part of a four stage plan and the percentages evoked are false."

But for Harry Tzimitras, director of the PRIO Cyprus Centre think tank, the actual number of troops that may end up leaving Cyprus was not a defining issue.

"It's a matter of principle" for some Greek Cypriots, Tzimitras said.

"If there's a reduction of 10 percent or 90 percent, there is still a presence of an invading power as they see it."

- Solve security, solve Cyprus -
Complicating matters are Cyprus' so-called guarantor powers -- Greece, Turkey and Britain -- who retain the right to intervene militarily and therefore must assent to any security resolution.

Tzimitras said the Turkish troops controversy mattered "not only because of the physical presence of armies on the island but also because it's the one area where the international community comes in."

Britain, which still operates two military base areas in Cyprus, has indicated willingness to cede some territory in order to expedite a deal.

Other areas of dispute -- including the potential resettlement of and compensation for the thousands of families who fled their homes in 1974 -- are also intrinsically linked to security.

The United Nations currently has around 950 peacekeepers monitoring a de facto ceasefire on the island, and could choose to wield the stick of paring back its personnel should the Crans-Montana talks fail.

"After decades of pouring resources into the Cyprus problem, the UN may signal that it wants to reduce its presence on the island and its meditation efforts, in part to push the Cypriot communities to take more initiative themselves," said James Sawyer, a Turkey and Cyprus researcher at the Eurasia Group.

Any deal reached in the Swiss Alps would need to be put to twin referendums among Greek- and Turkish-Cypriot communities, and if a solution to the security question can be found, analysts believe efforts to end one of the world's longest-running conflicts might finally bear fruit.

"A deal on security would mean the beginning of the final give and take," Faustmann said.

"If you have a deal on security you likely get a solution to the Cyprus problem. If you don't the talks will fail."

Photos: Tens of citizens stage protest in front of House ....