Protesters chanted "shoulder to shoulder against fascism" while others held placards urging "justice for arrested MPs". 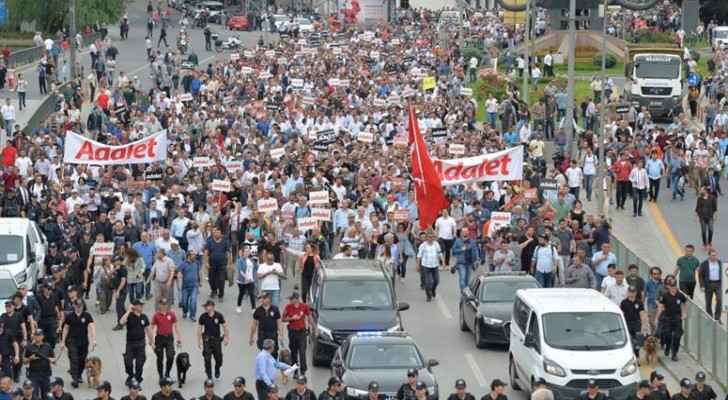 Thousands of supporters from Turkey's main opposition party on Thursday began marching on foot to Istanbul from Ankara to protest the jailing of one of its MPs in an unusual show of public anger against the authorities.

This is the first time a deputy from the CHP -- the main secular opposition founded by Turkey's first president Mustafa Kemal Ataturk -- has been held amid the crackdown that followed last year's failed coup.

A dozen lawmakers from the pro-Kurdish Peoples' Democratic Party (HDP) -- the third largest party in parliament -- have been arrested under the state of emergency put in place after the aborted putsch.

The CHP is the second largest party in parliament after the ruling Justice and Development Party (AKP).

CHP leader Kemal Kilicdaroglu, who has been accused by critics in the past of not taking a sufficiently tough line against President Recep Tayyip Erdogan, led the protest brandishing a sign saying "justice" in Turkish.

He vowed that he and his supporters would march all the way to Maltepe, on the outskirts of Istanbul, where Berberoglu is being held in jail.

"If there is a price to pay then I will be the first to pay it," said Kilicdaroglu as protesters gathered close to the main Kizilay Square on Ankara.

Istanbul is by road some 450 kilometres (280 miles) west of the capital. Reports said that Kilicdaroglu planned to cover up to 20 kilometres a day, stopping on the way, in what promises to be an epic trek.

Protesters chanted "shoulder to shoulder against fascism" while others held placards urging "justice for arrested MPs".

Security forces, who often clamp down on protests in Ankara and Istanbul, allowed the march to go ahead unhindered.

Kilicdaroglu marched at the head the the column surrounded by his own security detail, still clutching the "justice" sign and waving at the crowds.

There were reports of scuffles with opponents of the CHP with water thrown but no major incidents.

Hundreds also held a protest at Istanbul's Macka Park on the European side of the city, chanting "we will win through resistance".

"Why is an individual arrested just because of a news story? That means some are hesitant about the exposure of the reality inside that story," said an Istanbul protester who gave his name as Cem.

Kilicdaroglu and the CHP expressed solidarity with Erdogan in the wake of the July 15, 2016 failed coup against his rule, even meeting the president at his palace.

But tensions have risen since the April referendum on expanding Erdogan's powers which the president narrowly won but the opposition says was marred by violations.

Tens of thousands have been arrested in the crackdown that followed the coup bid, which the authorities blamed on the US-based Islamic preacher Fethullah Gulen. He denies the allegations.

Lawyers for Berberoglu on Thursday lodged an appeal against his conviction with the Istanbul district court.

The case relates to the controversial publication by the Cumhuriyet daily in 2015 of images purportedly showing the Turkish intelligence service seeking to transport arms over the border to Syria.

Video footage showed police opening crates of weapons and ammunition on the back of trucks which Cumhuriyet claimed belonged to the Turkish Intelligence Organisation (MIT).

Prosecutors accused Berberoglu, a prominent journalist for three decades before becoming an MP in June 2015, of handing the material to the paper's then editor-in-chief Can Dundar.

Dundar was last year handed a five-year-and-10-month jail term in the case and has since fled to Germany.

In a separate development, a Turkish court ordered the release pending trial of Cumhuriyet's online editor Oguz Guven, who was arrested last month on terror-related charges.